Out of sight but not out of mind: Henley Youth Festival will return 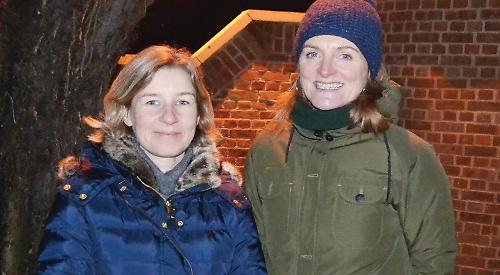 JO DICKSON lives in Greys Hill, Henley, with her husband Tim and two teenage daughters. She is a former co-chair of the
Henley Youth Festival, which would have taken place last month had it not been for the coronavirus pandemic.

LOOKING back on March 2020, it seems like longer than a year ago.

It is hard to believe that Henley Youth Festival was the last event to be held at the Kenton Theatre before lockdown.

We enjoyed a wonderful evening of dance, song, music and all round variety on a Saturday evening and it all seemed relatively normal at the time.

I don’t think the reality of what was about to happen had hit us at that point.

Usually after a youth festival we all take a few weeks to get our breath back after what is always a packed two weeks of school workshops, art and film competitions and exhibitions, the cross-country run and various performing arts events, including several shows at the Kenton.

Last year was a bit different as not long afterwards, we went into the national lockdown.

I did my usual jobs of collecting the festival flag from where it had been up in the market place, putting my festival boxes back in the loft and liaising with Sam Cawthorne, who writes our newsletter. This was alongside getting used to life being based at home pretty much permanently.

Regular walks in the woods to see the bluebells became a family favourite and our weekly takeaway become a real highlight.

In June, a meeting of the festival trustees was held, although this year via Zoom.

Kate Swinburne and I had stood down as co-chairs, so we were invited to become trustees of the festival and we were formally voted in at the meeting. Then we all had to make a decision about the future of the 2021 festival.

Unfortunately, a few members of our team had decided to step down, all for very good reasons (such as Anne, who was moving to Cumbria).

After a discussion, it was decided that due to the need for more volunteers to join the team and the uncertainty of covid and the implications it may have on workshop providers being able to go into schools and the
re-opening of theatres, the festival would be cancelled.

A sad decision for us all but one that seemed like the only sensible option.

Over the summer is a quiet time for the festival but in late August and into September we would normally start work on the theme and logo, put in applications for funding and book workshops.

The one exception to this is the Young Shakespeare Company, which is an afternoon workshop where a storyteller and several actors perform a Shakespeare play in a fast-moving, costumed interactive production.

The play is brought vividly to life around and among the children, at times including the whole audience.

Due to its popularity, we book this two years ahead and I was in contact with them over the summer and managed to hold over our deposit for the 2021 shows to 2022 and subsequently book in firm dates for next year.

In January, one evening I thought “it should be the HYF launch meeting this week”. I thinkt because life is so different, the children have not been at school and we are not going about our daily lives in the same way, that the absence of the festival hasn’t been so obvious. But clearly it was there in my thoughts as it popped up at the right time.

January and February are really busy months for the festival, getting all the information ready for the launch, updating the website, completing all the entry forms, visiting venues and ensuring the volunteers are lined up, the sponsors have been updated and the school workshops allocated.

A core team of about 15 people and a wider team of many, many more work behind the scenes to make sure everything runs like clockwork.

In March the festival itself happens. It sounds corny, but the months of preparation are all worth it when we see everything in progress and the smiles on children’s faces.

Recently, we cleared out the under-stairs cupboard at home and I came across some leftover newsletters from the 2019 festival and spent a happy few minutes reminding myself of such a wonderful year.

There is a photograph on the front of some children from Shiplake Primary School performing an extract from A Midsummer Night’s Dream at the Kenton Theatre, which really brought the festival’s “Dreams” theme to life.

Turning over, I came across photos of the dream catchers and 3m long batik backdrops that various schools produced during school workshops to decorate the Kenton Theatre.

It was a collaboration of nine local schools, which felt really important to fostering the Henley community spirit.

This enforced break also allows a time for reflection, not just on what Henley Youth Festival has become since its inception 27 years ago, but also on a personal level.

It has reinforced my decision that stepping down as co-chair was the right one and that new volunteers are needed to take the festival forward.

Recently, we received an email from someone who wants to get involved and help with the 2022 festival. It was a wonderful moment.

She said that she had been involved with the festival for several years in her youth and wanted to ensure that it continues in the years ahead.

I am confident that we will find the wonderful volunteers we need to take the festival forward, with the support of the trustees, and that they can stamp their mark on it, just as Kate and I did.