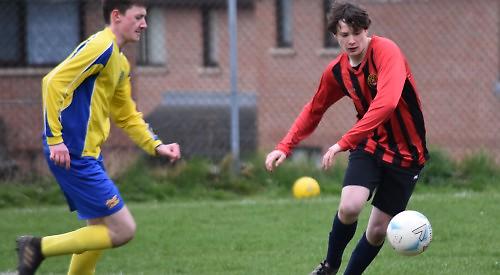 AFC HENLEY HOTSPURS U16 came from behind twice to snatch a point against ASCOT UNITED ACES U16 on Saturday.

The match, played at the Henley YMCA ground, was the first to be played after coronavirus lockdown restrictions were eased on Monday last week.

But the four-month lay-off didn’t seem to affect the players as the Hotspurs started brightly with Finn Flood forcing a good save from the opposition goalkeeper after five minutes.

Despite being put under pressure, it was United who took the lead after 20 minutes with a shot from the edge of the penalty area.

Hotspurs equalised 15 minutes later when Ollie Notman put in a corner to the far post for Flood to knock back to Benny Wood to fire home.

The second half was evenly matched until the 62nd minute when Hotspurs went behind for a second time. United’s goalkeeper unleashed a pitch-length kick, which was picked up by a striker, who chipped goalkeeper Huseyin Tarhan.

The Hotspurs immediately pushed for the equaliser and were rewarded five minutes later when Dylan Gadson calmly tucked away a loose ball in the penalty area.

The last 10 minutes belonged to the Hotspurs, but they couldn’t get the winner, Flood came close with a long-range shot striking the post in the last five minutes but the match ended 2-2.

A THUNDERBOLT from 20 yards set HENLEY HURRICANES U16 on their way to victory away at PURLEY JUBILEE U16 on Saturday.

The Hurricanes started the match well and the ball fell to Casper Fearn, who broken the deadlock with his well-struck strike. Afterwards the hosts continued to dominate possession but couldn’t find the final pass or shot to extend the lead.

Then, against the run of play, Purley equalised with a goal from close range after the ball had been parried on to the crossbar by goalkeeper James Preston.

With the score level at half-time both teams would have been confident of a result but it was Henley who, after missing a few chances, took the lead again.

Tom Young fed a pass inside the fullback for Tom Vockins to cross and find Danny McAllister who finished the move into the bottom corner.

The Hurricanes rounded things off with a goal from midfielder Will Thompson from just inside the box.

Charlie Graham was the man-of-the-match for the Hurricanes, providing a solid platform in defence for the team to play on the counter-attack.