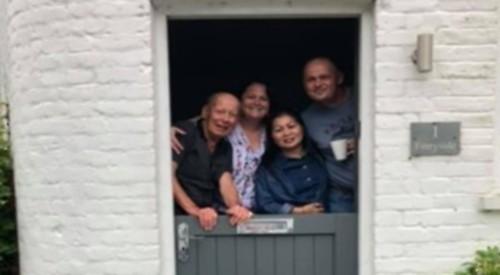 LEONARD HILL, who was known as Len, has died, aged 80.

He was born in Maidenhead on May 9, 1940, the only child of Leonard George Hill Snr and Gladys Adby.

Len grew up in Wargrave and attended the Wargrave Piggott Schools.

In his early years, he discovered his love of motorbikes, cars and boats. He was an avid engineer and boat lover.

After school, Len became an apprentice at Stuart Turner in Henley and then held various other roles of responsibility, including at Val Wyatt Marine in Wargrave and at Harleyford Marina.

Len married Dinah Brown, also from Wargrave, in 1966 but sadly lost her suddenly in 2009.

He loved to walk the Berkshire Downs both alone and with friends and family. He was an avid gardener and would spend hours planting and harvesting the fruits and vegetables of his labour.

He was also blessed with two grandsons, Nicholas and James, who live with Sarah in America. He was living in the lovely village of Compton, West Berkshire, with his youngest son Michael and daughter-in-law Linda until he passed away.

He died peacefully after suffering a sudden stroke at the Royal Berkshire Hospital in Reading on April 7.

Len will be remembered as a loving husband, father, grandfather and friend.

There will be no funeral service but a cremation on an unspecified date. A memorial service to celebrate his life will take place this summer after the coronavirus restrictions have been lifted.