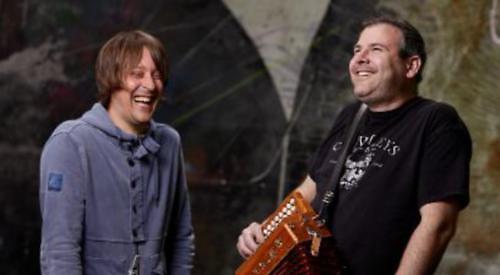 TWO of the UK’s leading Celtic fusion musicians are joining forces for an online gig in association with Nettlebed Folk Club.

Ross Ainslie and Tim Edey will be in concert from 8pm on Monday (June 14).

They will play two sets separated by a short interval before joining fans for a post-gig Zoom call.

Folk club organiser Mike Sanderson said: “These award-winning musical geniuses are old friends and two of the best musicians of their generation.

“They come together for a rare virtual performance of tunes and songs at Tpot Studios in Ross’s native Perthshire, now Tim’s adopted home.

“These are uncertain times and hopefully this wee gig will lift your spirits and give you some much-needed optimism.”

Hailed as an instrumental genius, Edey was named musician of the year at the 2012 Radio 2 Folk Awards, also winning best duo with harmonica player Brendan Power.

A multi-instrumentalist, he has toured with Irish folk veterans The Chieftains in recent years as their guitarist and accordionist of choice.

Having also forged a long-standing solo career, he is rated by many as one of the best guitarists and melodeon players on the Celtic folk scene.

Ross Ainslie has been nominated three times for musician of the year at the Radio 2 awards, having won best duo with pipes and whistles player Ali Hutton.

He has also been named composer of the year at the Scots Trad Music Awards.

Ross has released four solo albums to date and performs with bands including Treacherous Orchestra and Salsa Celtica.

Tickets for Monday’s concert start at £10.

For more information and to book, visit www.
myplayer.uk/rossandtim