Why do motorcyclists and fly-tippers have to spoil our countryside? 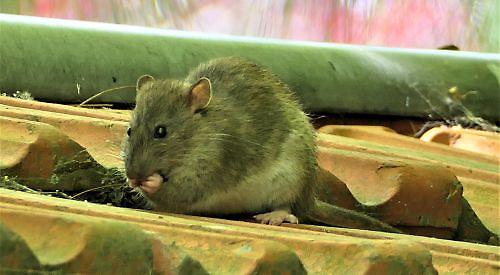 OUR garden could be considered experimental in that we have filled it with native trees, shrubs and flowering plants in addition to the global rarities that were already in place.

As a result, it is teeming with wildlife, including a multitude of insects, birds and amphibians, foxes, deer, badgers, wood mice and several species of bat.

All are most welcome. Others, such as alien grey squirrels, are not.

When Rosemary and her late husband Bruce moved into the property in 1987, she became annoyed with the prevalence of common couch grass (Elytrigia repens) and applied some herbicide.

That night she had nightmares about the effect this would have on the frog population.

Since then, nothing toxic has been used on this patch and the result is palpable.

Since we got together we have been seeking out as many native plants as possible to put in the garden, be they trees, bushes or flowering plants. So far, everything is doing very well.

Many other native flowers have also found their way in through our boots and trouser bottoms after our regular expeditions.

Sanicle (Sanicula europaea) has also found a new home here. Hedge woundwort (Stachys sylvatica) is also flourishing after we gathered seeds from our walks last year and threw them about with abandon, as would happen with a natural breeze.

Bumblebees love them, so once the plants are pollinated, we should be able to look forward to a constant presence.

A few weeks ago, a large clump of red campion (Silene dioica) was swamped with blackfly but we did nothing to it.

We left it to the blue, great, coal and marsh tits. Job done, pests eradicated, eaten or fed to their young.

It’s easy really; nature will do it for you if you are free to let it and there’s no need to use nasty man-made chemicals as the little birds are only too happy to oblige. The war between our resident magpies and jackdaws seems to be over, which is good as these skirmishes have been very noisy.

The jackdaws still demand breakfast every morning. They have huge appetites and eat everything provided. They especially like the scraps of pizza crust that we sometimes supply.

One funny aspect of the jackdaws’ behaviour is that there always seems to be a scout. Once Rosemary has dished out the morning food he’ll tell the rest of his gang that grub’s up — but not before he has scoffed as much as possible. Crafty beggar.

Glancing at one side of our shed, we witness the copulation of two hoverflies, the small-headed (Pocota personata).

The hoverfly is a strange little thing. A bumblebee mimic, it buzzes as if angry.

We still have a problem with common rats (Rattus norvegicus). They are so destructive, scurrying about all over the place.

We think we’ve identified their stronghold and will take remedial action after taking professional advice.

Rosemary asks me where we should go on this somewhat gloomy June day. She is rather disappointed with the light but always wants to get out.

I suggest that we renew our acquaintance with College or Abbot’s Wood off the A4074, which we have not visited since the autumn.

To get there we pass Cane End after leaving Caversham Heights and then turn left off the main road down Deadman’s Lane and park up.

It is a dark day and I wish I’d brought a torch.

But after a few minutes we find ourselves in a ride that is lovely, green and soothing.

The first thing that strikes us is the huge number of large black slugs (Arion ater) on our path. They seem to be everywhere, moving between emergent vervain (Verbena officinalis) and perforate St John’s Wort (Hypericum perforatum).

Rosemary spots two seemingly having a bit of a spat and names them Boris and Matt.

There is a large quantity of spear thistle (Cirsium vulgare) along our path together with goat willow (Salix caprea).

On the ground are many flowers, including tufted vetch (Vicia cracca) and white clover (Trifolia repens), both members of the pea family.

The scent of old woodland pervades everything, sweet and sublime.

We reach the end of the ride and turn right into open woodland. Rosemary points out that it has the feel of old parkland. She may be correct as there is considerable distance between the trees, allowing light to illuminate the forest floor.

After the recent wet weather, we see no butterflies but the birds are on song. Chiffchaffs chime, song thrushes belt out their mournful threnodies and robins and blackcaps spell out their melodious stories. In the distance a woodpecker laughs.

Common ragwort is popping up, lichens cover fallen branches and honeysuckle drifts through young oaks like a lover.

A number of beech trees seem to be suffering with diseased-looking bark but perfect leaves. Curious.

We come across a small pond, which must be a go-to for birds and mammals, and then move through the open forest.

All of a sudden, our peace is interrupted by two youths on motorbikes as they scramble along the bridleway past us, polluting the air and making a great noise. It is illegal, of course. A police siren sounds and the motorbikes become silent.

We move on into an even more open area of woodland where bramble flowers are attended by white-tailed bumblebees (Bombus lucorum) and foxgloves glow, deep-purple, under the shade of a stand of oaks. There are many oak and beech saplings.

The noise of the traffic on the main road from Reading to Oxford is challenged by the squawks of a pair of jays.

We head south and pass through a glade full of young whitebeams and silver birches. This is perfect territory for birds to build their nests with a mixture of bracken, long grass, scrub and dead, decaying and young trees. The pleading of fledgling blue tits and the squeaks of a young great spotted woodpecker prove it.

I spot a guelder rose which seems a tad incongruous.

We walk past two tall standout conifers. I’m pretty certain that they are Douglas firs from the shape of their cones. What are they doing here?

As our walk tails off, I spot an unofficial path to our left which will take us back to Deadman’s Lane. After a quick skirmish with some dangling branches, we meet the roadside.

We are both upset at the sight of beer cans and bags of rubbish in black bin-liners that have been dumped here among detritus thrown from cars.

It’s heartbreaking what some of our fellow human beings do to the environment. We will be back to clear the rubbish but it’s a sad end to an otherwise lovely day.