Kicker Humphreys stars with ball in hand but side pegged back 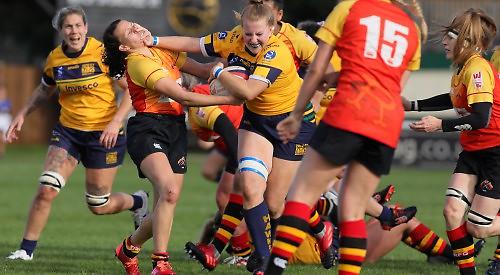 WITH the game seemingly wrapped up and pushing for the bonus point win, Henley found themselves faced with a dramatic finish and a final kick that went wide.

The Hawks led 17-5, having been on top for the majority of the match, but two late tries saw Richmond have the chance to take the win with the final kick of the game, although this wasn’t to be.

Henley started brightly but it was the hosts who opened the scoring with a well-worked move to take a 5-0 lead. Minutes later, a series of quick phases and the high tempo play allowed Murray to bundle over under the posts. Humphreys added the conversion.

The next 15 minutes saw Henley put pressure on the Richmond 22, only to miss a handful of potential tries and a penalty kick near the posts. Despite the onslaught, the half finished 5-7.

Richmond played the majority of the second half defending their line. The pressure had to tell and with the scrum gaining dominance too, a ball out the side allowed for swift passing and strong finish from Mueller to make it 5-12.

The Hawks were now in control and if not for a series of missed final passes should have had more than one more score. As it was, a quick transition allowed Humphreys to use her pace to score in the corner. It was now all one way as Henley went for a fourth try and bonus point.

Richmond then made the most of a series of penalties and a break down the right touchline meant it was now 12-17.

Then in the final seconds of the match, a bizarre free kick at the scrum gave Richmond a last gasp that resulted in a try and shot at the win. The kick, however, was unsuccessful and resulted in a share of the points.

With Thurrock winning on a low scoring game with Old Albanian the chance to be top of the Championship 1 South was missed. Henley currently sit third behind Bath and now take a break.

AFTER last week’s defeat to Henley, Abbey regrouped to claim a bonus-point victory over Hove.

In the end, it was the boot of Rose Brown and the home side’s game management that secured their first league win since February 2019.

It was a scintillating opening quarter for Abbey, as Charlotte Faux and Hollie King finished off well-worked team moves — Faux from a solo run and King muscling over from short range. With Brown converting Faux’s try, the hosts took an early 12-0 lead.

Hove responded well with both their props crossing for tries in quick succession.

Hove hit back when winger Abi Martin scored in the corner before Abbey’s Bevan darting run sealed the bonus point.