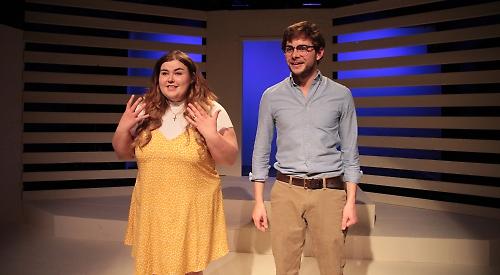 The simple but striking stage set, enhanced by Jon Churchill’s lighting, provides the perfect backdrop for a cautionary tale of a young couple in their search for a dream home.

Jill and Ollie receive an unusual proposition from the mysterious Miss Dee (Liz Carroll) — they can have a house for nothing, provided they do it up in order to encourage others to do the same and regenerate the area.

But what seems like an opportunity reveals itself as an unholy pact.

Renovating the house proves easier than they anticipate, provided they are prepared to hurt other people in the process.

Those other people are the homeless — nameless and friendless people whom no one misses if they disappear.

Jill and Ollie wrangle over the wrongs and rights of the shocking course of action on which they embark, but they are driven on as co-conspirators by sheer greed.

Their direct addresses to the audience implicate everyone in the moral choices being made as the plot progresses.

We are being asked how far we would go ourselves to pursue our desires in an avaricious world.

Liz Carroll provides a touching cameo as Kay, a homeless woman brought to the house to become one of the “renovators” fuelling the creation of a dream home.

She bonds with Jill, but their brief interaction is not enough to stem the couple’s exploitation of other human beings.

The three actors rise to several challenges in this production. The pared-down set, with few props, demands mime and physical movement to convey meaning.

Quickfire dialogue is delivered with staggering precision, with Jill and Ollie finishing each other’s sentences.

The high point of the play is the garden party, with Wells and Upton impressively playing themselves and all the guests, including sulky teenage neighbours, using changes of voice and demeanour alone as tools to convey character.

This scene moves at terrific pace and is fantastically funny — in an unsettling way.

Radiant Vermin shows us a very real couple in a surreal situation.

Upton is strong and convincing as Jill, who is never satisfied.

Wells puts in a very accomplished performance as the hesitant Ollie, torn between loyalty to his wife, his morals and his own aspirations.

Carroll is composed and intriguing as the sinister Miss Dee.

This is a bold and innovative piece from Progress Theatre, superbly directed by Rebecca Douglas. It’s hilarious but chilling.

Radiant Vermin makes you laugh out loud, but it also makes you examine your own conscience in a powerful way.

• Progress Theatre’s next production is David Wood’s adaptation of Babe, The Sheep-Pig, which is booking from December 8 to 11.