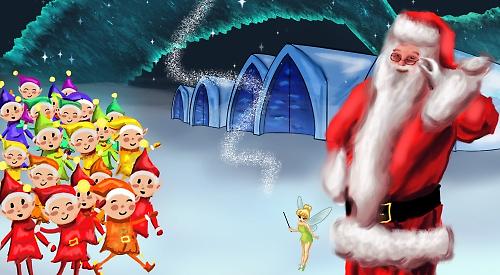 THE wind, north of the North Pole, beat against the banners held by the elves outside the glass workshop of Santa Claus.

The elves’ pointed hats made a rainbow of colour: red for the
carpenters, orange for the painters, yellow for the sewing girls, green for the tallest elves in charge of the clockwork train sets and blue for the picture-book boys.

The union representatives were more conservative with indigo and Chairperson Elf had a silver star on his violet hat.

One very plump elf stepped forward and thrust his banner high with the written words: “We want more toys”.

A growing mumble of “Yes, yes,” grew louder and louder.

Santa held up his hands.

“We’ve run out of wood, paint, cloth for the dolls’ dresses, fur for the teddy bears and rail track for the train sets.

Jeers of “It’s your fault” grew in volume until the air was full of anger.

Without warning, a twinkling star fell from the night sky and Tinker Bell settled on the snow beside Santa. Silence washed across the elves like a soothing hand.

“Why have you not asked for help, Santa?” asked Tinker Bell. “Peter Pan is distraught that there will be children with no Christmas stocking at the end of their beds in the morning, or that special gift asked for in their letters to you under their Christmas tree.”

“It’s all too late now, Tinker, my dear,” cried Santa. “I have failed my elves.”

“Nonsense,” she replied. “Where is your faith in fairy tale magic? Elves, lower your banners, raise your arms to the sky.”

Tinker Bell fluttered her wings and settled on Santa’s shoulder and, waving her wand, six glittering night stars dropped to the snow and Tootles, Nibs, Slightly, Curly and The Twins tumbled and rolled into the Lost Boys.

“Your help has arrived. Many hands make light work and you only have a few hours to fulfil your requests,” said Tinker Bell.

“What do we work with?” shouted an elf in a red hat. “Invisible wood?”

“Of course not, silly elf,” replied Tinler Bell. “I’ve magicked everything you need inside your workshop.”

The silence of despair changed to whoops and shouts of, “Come on, boys and girls, there’s work to be done.”

Santa felt a nose nuzzle his back and turned. Rudolph was standing ready and waiting, his big brown eyes bright with joy.

With a catch in his voice, Santa said: “We will not fail after all, my faithful friend.”

“There, there, Santa, dry your tears of joy,” said Tinker Bell. “Let us go and help what needs to be
finished.”

Her wings twitched and she flew after the elves and her boys.

Dumpy, the Christmas foreman, climbed on to a wooden box and announced: “We’ve been given a miracle; it’s hard to believe an empty workshop has been filled by the wave of a wand.”

He shook a sheaf of papers and ordered: “Hand out the jobs, Hoppy, we’re running out of time.”

“Start the conveyor belts,” came a shout. “Get the sewing machines plugged in,” called another voice, followed by “Don’t forget the rail track needs polishing — can’t have any tears that a train won’t run.”

Five minutes later, the factory was full of humming machinery, laughter, chatter and toys being made.

Every elf snatched a fawn apron to protect their tunics as they rushed to their seats at the long tables.

The carpenters began making dolls’ houses. Elfin girls passed these over to another table and the granddad elves painted them with red roofs, white walls and a yellow front door.

Over in a corner of the workshop, Mrs Dumpy was in charge of the dolls’ dresses.

She was very critical of how her girls sewed a straight seam.

“No squiggly seams, my lovelies. Remember our motto, ‘A stitch in line saves time’.”

“Help,” came a call from Mrs Santa as she rummaged through a box of teddy bear fur. She tossed red, pink, yellow, brown, green and blue on to the floor.

“I need orange fur,” she said. “A little girl has written asking for an orange coloured teddy bear but I have none, the box is empty.”

Tinker Bell settled on her shoulder. “Not quite,” she said. “Look, there’s a brown paper bag in the corner.”

Mrs Santa blinked and said: “How did I miss that?”

She plucked out the bag and opened it before exclaiming: “Orange fur! How did I miss seeing this?”

A wail of “Oh no, it’s broken” came from the other side of the workshop.

“Must dash, I have another miracle to do,” said Tinker Bell. The odd-job elves were filling the Christmas sacks faster than an elf could say “Jack Robinson” and near collisions were avoided with shouts of “Make way, make way”.

Tootles had taken charge of his friends to load the sleighs, giving Nibs a clipboard and pencil to check that no sleigh was forgotten.

Slightly’s job was to check that all the bells tinkled, Curly to check the harnesses and The Twins to use a stopwatch to see each sleigh slid out of the door on time.

A miniature Father Christmas jumped on board, reached for the reins of a reindeer and zoomed into the sky, leaving a trail of Christmas stardust.

As the last sleigh disappeared, Dumpy heaved a deep sigh.

“I feel complete now it’s over,” he said, wiping his forehead with his sleeve, “and I’m very tired.”

“It’s the magic,” he explained. “Look around you, every elf and Lost Boy is jubilant as they have saved this special night.”

Standing outside again, the storybook people watched the glittering glass toy factory disappear until next year.

Tinker Bell pirouetted on Santa’s shoulder and said: “It’s time for us to go back to Neverland and celebrate our Christmas with Peter.”

Santa held out his hand and Tinker Bell settled in his palm.

“Each one of you go with our gratitude and love and tell Peter I hope to see him soon,” he said. “Until we meet again...”

Magic whirled them into stars and the night sky.

Is it real? Of course, if you believe in Santa Claus.