My cure for winter blues... a walk in the wild and cuddle with cats 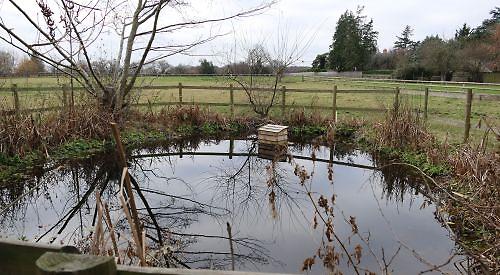 BEFORE breakfast the two of us take our customary stroll around our back garden. It is still quite dark as we always get up early.

The winding paths through the trees have evolved of their own volition, which makes it fun when we are asked how we designed them. Nature finds its own way.

Most of the leaves on our deciduous trees have fallen with the exception of those on diminutive young oaks and beeches that shine copper-coloured or golden.

With most of the summer canopy now lying at our feet, the sky has opened up to reveal shoals of wheeling black-headed gulls and circling red kites.

Carrion crows, jackdaws and magpies caw, clack and chatter in the bare branches. A large-beaked raven flies south. A robin sings, as does a blackbird. A wren darts about and goldcrests “diddly-dee” under evergreen cover.

Our gang of long-tailed tits “see-see-see” as they move through the conifers. Starlings make odd noises. Wood pigeons and collared doves look on, dunnocks scuttle below and, much to the annoyance of great, coal and blue tits, a grey squirrel snaffles bird food from one of our feeders, cheeky scamp. Three members of our new feline family watch through a window and follow the birds’ antics. At the moment they don’t seem eager to explore outside. They are happy to just eat, play and sleep, much to our amusement. We’ll let them out in the spring if they so wish.

For our walk today, it is overcast but windless and calm with no hint of rain.

Rosemary drives us to Rotherfield Peppard, where we leave the car outside All Saints’ Church, a comely, old building made from flint with a stone dressing.

After a long absence, it is a pleasure to walk here again on this lovely ground tucked away beyond the B481. We head east.

A near-black carrion crow looks down on us from the twigs of a young beech. Nearby there is a pond, which I’m surprised to find on such high ground.

Ponds are so important for wildlife. Not only do they provide a home for wildfowl and amphibians but multifarious dragonfly larvae and innumerable insects that live above and below the water surface, including water scorpions (Nepa cinerea), common pondskaters (Gerris lacustris) and common water boatmen (Corixa punctata).

Thirsty mammals, from weasels to deer, depend upon ponds.

And that’s not to mention aquatic plants. One of my favourites is the handsome marsh-marigold (Caltha palustris), whose large yellow sepals can be seen from late March into midsummer.

On the road to Sonning Common from Emmer Green there is a colony in a small pond on a turn just past the water tower. As we pass the church, we note some attractive trees, including a particularly large hornbeam, which loves clay soil. Yew trees are present, as expected.

Rosemary spots a fallen bough covered with turkeytail fungus among the delicate leaves of white dead-nettles.

Turning north-east, we head along a path between horse paddocks. The last time we were here, these were full of wildflowers and grasses such as meadow fescue. It is pleasant, open country.

The first 100 yards of the path have been scattered with wood chippings. Shame about the rest.

Rosemary points out a multi-trunked ash tree in the near-distance. The terminal keys are diagnostic, as are winter’s purply-black buds. The grey, fissured bark on an old specimen like this is often home to lichens.

Alongside the wooden fences the leaves of young hawthorns have turned custard-yellow with orange spots, their stems as spiky as ever.

We meet a deep, dark stand of trees. The light fades for a few seconds but then my eyes become accustomed to the conditions. We stop to admire a broad-branched, solid oak and then our path leads along the side of Greys Green Golf Course where a lot of native trees have been planted.

Unfortunately, many of the young trees appear to be being strangled by their guards, which can be a killer when moisture builds up between the trunk and the protector, leading to rot.

Sadly, we have come across many unnecessary casualties. The guards should be removed after the tree’s first few years of growth.

I cannot identify the material these guards are made of but it is tough and when they come loose can despoil the view as much as the drinks cans, takeaway containers and crisp packets that line our roads. Such a shame.

We note the presence of goat willow or sallow, an indicator of a high water table. This species grows fast and will have “pussy willow” catkins in the spring.

High up in a young oak is a magpie’s nest with a “crown of thorns”.

Meeting a crossroads, we turn right and south towards Bottom Farm. It is pleasant here as the track dips to reveal some undulating open land.

For once, I have lost my bearings but not to worry as we have more or less run out of time for our pre-booked lunch. We take in the views and retrace our steps. I’m getting a feel for this new territory now and we will definitely return.

Back near the old rectory I spot some pink-flowered hogweed. I have to remind myself that this is December. The botanical world seems to have gone haywire — even dandelions are in flower.

Back in the car, we head north past a small triangle of grassland that makes up part of Peppard Common where children from the village primary school are skipping over the grass, kicking footballs and having fun.

It’s good to see and I hope that when they become adults they will think back and realise how lucky they were to have had the pleasure.

When I was a boy, I enjoyed the build-up to Christmas but less so now I am older. I get bored when nearly everything is closed. Still, we will hunker down with our hyperactive cats.

If you have any winter blues, remember that spring is just around the corner with all the joys that it will bring. We both wish you all a very happy Christmas.