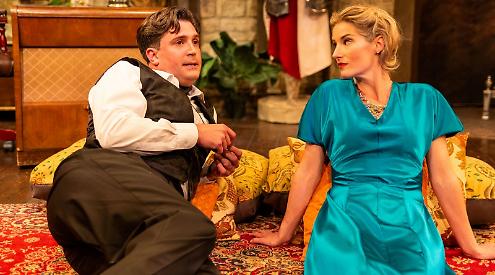 AFTER a long pandemic delay Dorothy L Sayers’s Busman’s Honeymoon finally pulls up at the Mill at Sonning in an absorbing new production directed by Brian Blessed.

In a programme note, Blessed reveals that he played the part of Bunter the valet more than 60 years ago.

Aficionados of Sayers will know that Bunter is the impeccable manservant to her detective hero, Lord Peter Wimsey. The Honeymoon bit of the title refers to Wimsey’s new marriage to detective novelist Harriet Vane.

The Busman part indicates that the couple will have a murder to deal with or, as Lord Peter puts it, “back to the grind”.

They’re spending their honeymoon at an old Hertfordshire farmhouse which Lord Peter has recently bought.

Unfortunately, the previous owner, the miserly Mr Oakes, is still there. More unfortunately, he is dead in the cellar.

Reluctantly but inevitably dragged into the business, the newlyweds must assist in (i.e. take charge of) the police
investigation.

Suspects range from Oakes’s cleaner, Mrs Ruddle, to a gardener called Crutchley and even extend as far as the local police constable. Or perhaps it’s the vicar? Or just possibly the sweep, Mr Puffet?

It’s an ingenious mystery, living up to Sayers’s determination to produce a “fair play” puzzle.

The clues are indeed there, played out in front of us on stage.

A large cast is smoothly choreographed. I particularly liked the moment when Lord Peter (James Sheldon) and Harriet (Kate Tydman) do a kind of slow-motion dance as they consider the traditional whodunnit questions of “who, how, why”.

There are some knowing winks to detective story tradition, while the habit of having broadly comical and voluble lower-class characters like Mrs Ruddle (Joanna Brookes) or Puffet (Iain Stuart Robertson) goes right back to Shakespeare.

There’s a touch of seriousness to it as well. The second half is more intense and Sayers’s concern to give a moral dimension to the detective story is shown by Lord Peter, driven by conscience to solve the crime but made uneasy by his awareness that the perpetrator will go to the gallows.

Not too serious, though. An early remark by Bunter (George Telfer) — “the tobacco requisites are temporarily in the whatnot” — sets the tone for an evening that is as much P G Wodehouse as it is Golden Age detection.

Visit the Mill at Sonning and see if you can work out whodunnit and how.