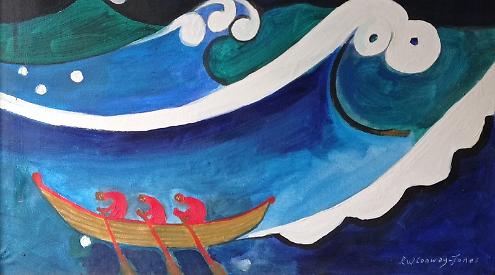 ARTIST Richard Conway-Jones looked back over his 30-year career and decided to find new homes for some of his work.

He will be displaying many of his smaller paintings at an exhibition at the Old Fire Station Gallery in Henley next week and they will all be available to buy.

He will be sharing the space with antiques dealer Adrian Wildman, who specialises in modern design from the Sixties and Seventies.

Richard, from Twyford, studied graphics at the Berkshire College of Art and Design. He then took a film studies at Harrow Technical College as he was thinking about a career in film-making but found he preferred life drawing and painting.

His choices of subject vary from painting the River Thames at Wargrave and sketching people at Henley Royal Regatta to drawing and painting portraits, birds and flowers. Richard says his influences are varied and include the Impressionists, Toulouse-Lautrec, Gauguin, Van Gogh and “all the ones you’ve heard of”.

He adds: “I was very lucky to get a few trips to Vienna and absorbed all that, so early 20th century European, Viennese and Parisian schools. I’m also influenced by outsider art. It’s difficult for a lot of people to grasp but I got a book on it and for a while I went crazy for it.

“It’s untrained artists who haven’t got a formal tradition and sometimes they’re the best artists.

One of Richard’s larger paintings, with a butterfly theme, was based on a group of women he knew who were making clothes together in London in the Nineties.

He says: “It was loosely based around a fashion shop in the centre of Soho called Idol, which was there for about 10 years. A lot of friendships formed around it. It’s all ancient history now, although these pictures capture the personalities.”

Richard also has a passion for recording music, which he describes as “acoustic” and “folky” with a bit of electronica. He has been prolific, creating about 40 albums with 10 released digitally through Ba Da Bing Records in New York.

Richard had a poster advertising his songs during his open house at last year’s Henley Arts Trail.

“People kept coming through saying, ‘What is your musical style?’,” he says. “I’d point to my poster and they’d Google it and hear it on their phones and say, ‘Oh, you’re Bob Dylan’. Five people in three days told me I was Bob Dylan.”

Naturally, he enjoys the comparison, given that he has Welsh heritage and Dylan changed his name after reading the poetry of Dylan Thomas (and has exhibited his own drawings and paintings in major art galleries).

“I’ll take that,” says Richard. “It’s coming from poetry and Welshness, which is in my veins.”

• Richard Conway-Jones and Adrian Wildman will be exhibtiting at the Old Fire Station Gallery in Upper Market Place, Henley, from Thursday (May 19) to Tuesday, May 24. For more information, visit www.conway-jones.co.uk