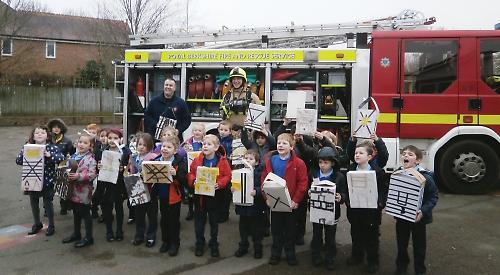 PUPILS at Robert Piggott Infant School in Wargrave burnt down their own paper houses as part of a class project on the Great Fire of London.

The children created their own Pudding Lane on the school field using the models they had made.

These were arranged close together in a line to mimic the street where the fire began in 1666.

Firefighters from Wargrave fire station then set light to the houses and the youngsters watched them burn.

The children were also given a talk on fire safety and were shown around the crew’s fire engine and allowed to try on the firefighters’ protective clothing before operating a hose.

Jill Nixon, head of school, said: “The whole afternoon was wonderful. The children learnt about fire safety as well as having a great deal of fun watching their Pudding Lane burn to the ground. It was a fitting finale to this term’s topic of ‘What’s Cooking’.”