Woman with 30 years' service is named carer of the year 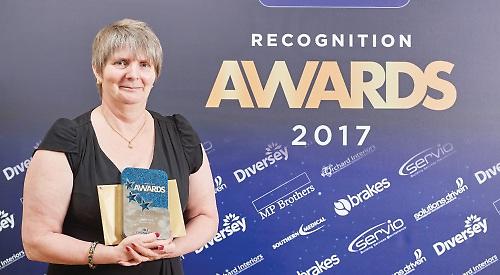 A CARER who looks after elderly people with dementia has been honoured for her efforts.

Sharon Hunt, who joined the team at Huntercombe Hall in Nuffield two years ago, has been named carer of the year by her employer Caring Homes Group.

The 56-year-old was nominated by her colleagues earlier in the year and learned she had been shortlisted out of more than 3,000 applicants about a month ago. She was announced the winner at a ceremony in Watford and was presented with a trophy by pop star Ronan Keating.

Ms Hunt, a mother-of-three who lives with her partner in Checkendon, has lived in the area for more than 30 years and was previously a cleaner at the independent Oratory School in Woodcote.

She applied to work at Huntercombe Hall as she wanted to change career and has since completed all three levels of the company’s dementia training as well as a medical competency training programme.

She is also the home’s designated “dignity champion”, acting as a role model to promote respectful behaviour towards people with dementia.

Judges said: “Sharon’s commitment to the residents is her care is outstanding. She supports those living with dementia to undertake a fulfilled life and is able to deal with those who present challenging behaviour in an effective and compassionate manner.”

Ms Hunt said: “I took on a job in care because I wanted a change and I absolutely love it. It’s got so many benefits — I find it very satisfying to know that people are being cared for and to see the smiles on their faces.

“I really enjoy the family atmosphere here — it feels like a home away from home and we have great relationships with the residents’ families, so I definitely want to stay for the foreseeable future.

“I was absolutely shocked when they announced that I’d won. I couldn’t believe it and it took some time before it really sank in but it is great to be recognised for everything I’ve done. Ronan was absolutely lovely.

“There were a lot of different award winners so I wasn’t on stage for long but he gave everyone a kiss and hug when they came up for their trophies.

“I’ve been congratulated by all my colleagues and people have been decorating the home with balloons and flowers for me. Some residents have also congratulated me and so have the families of those whose dementia is more advanced.”

Bernie Boyle, who manages the home, said: “Sharon is a real asset as she has an extremely caring attitude and is always willing to go the extra mile. It’s such a fabulous award and we can’t believe she has won. She was up against a lot of competition so this really is a mark of how big an impact she has made and how hard she works.”