Woman's sponsored walk to pub in memory of husband 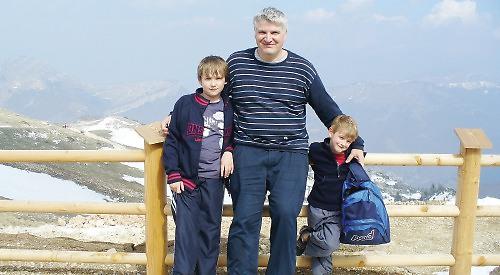 A WOMAN and her teenage son completed a charity walk in memory of her late husband.

Her husband Nigel died from an aggressive brain tumour only six weeks after being diagnosed in 2012.

The pair took part in the Grand Union Canal Walk, a 5.5-mile stroll from the Three Locks pub in Stoke Hammond, near Milton Keynes, to the Grove Lock pub, where they had lunch and a drink before walking back.

Mrs Legg, an information researcher with Thales in Reading, said: “Nigel loved walking, pubs and real ale so it seemed like a good thing to do, especially as it started and ended at pubs.

“It was a gloriously sunny day — it made me wish I had packed some sun cream!”

Mr Legg, a software engineer, had been experiencing issues with his balance and vision when he was diagnosed with a grade four glioblastoma multiforme, meaning the tumour was spreading quickly.

He had been due to start chemotherapy and radiotherapy treatment the day before he died. He was 49.

Mrs Legg said it was a particularly difficult time for Jamie, who is studying for his A-levels at The Henley College, and the couple’s other son Michael, 22, who is now a student at Plymouth University.

She said: “My husband died six weeks after he was diagnosed, which was a big shock for everyone. I don’t know how we got through it.

“Before he passed away it was horrible knowing there was something wrong with him but not knowing what it was.

“It was especially difficult for the boys, having to come to terms with it so quickly. One month he was running around with them, the next month he had died.

“The type of brain tumour Nigel had is so devastating because it just took him.”

Mrs Legg added: “I’m pleased Jamie could be on the walk with me to celebrate the life of his dad.

“Sadly, Mikey is at university and couldn’t come but I know he was thinking of us and his dad.”

The walk raised £500, bringing the total she has raised for the charity over the last five years to about £5,500.

Once she abseiled down the Spinnaker Tower in Portsmouth and she also ran a 5km race.

Mrs Legg said: “After Nigel passed away people asked if we wanted flowers or donations for charity.

“Nigel was never one for flowers, so I found the charity and that is how I got involved.

“At first friends and family were surprised because I’m quite a quiet person but I have persevered and done things outside my comfort zone. With the abseiling people gave quite a lot of money because they thought I would never do something like that.

“I squeeze people for money every year and they keep giving. It’s a tribute to Nigel that people want to keep donating because they remember him fondly.”

Her father Maurice Young and brother Ian Young have also fund-raised for the charity.

Mrs Legg has visited the charity’s research centre in Portsmouth.

She said: “It was fascinating to see how it continues to try to come up with some kind of cure for brain tumours and some form of effective treatment.

“Research into this disease is really important to me as brain tumours can affect anyone at any age but no one knows what causes them.

“I hope our efforts will help raise awareness of the current underfunding for research into brain tumours.”