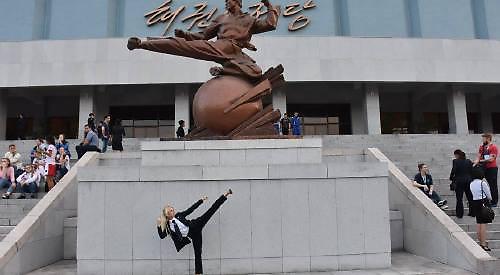 WITH tensions mounting between North Korea and the West, few would contemplate a visit to the notoriously secretive Asian nation.

But Jenine Hutchinson, who spent a week in the so-called “hermit kingdom” while competing in the 20th annual Taekwondo world championships, says she enjoyed her visit and would even return.

The 29-year-old, of Gravett Close, Henley, was kept under constant surveillance by a team of three tour guides and was not allowed to leave her hotel except to take part in the tournament.

She and five other women from the England taekwondo squad, who stayed in the capital city of Pyongyang, were fed only rice, vegetables and patties of an unidentifiable meat for breakfast, lunch and dinner every day.

Their phone usage was monitored and they couldn’t take photographs without permission while they had no access to the internet, newspapers or books and could watch only Korean television programmes.

However, Mrs Hutchinson says she was treated well and delighted with her performance as she won silver in the 4th dan black belt section and bronze in the under-51kg sparring as well as joint bronze in the team power-breaking.

She and her teammates won seven medals between them and were eighth overall.

Mrs Hutchinson, a taekwondo instructor who lives with her husband Kyle, grew up in South Africa and took up the sport when she was nine, achieving her black belt at 16.

She moved to Henley almost two years ago and trains with the England squad at Didcot every fortnight as well as on her own and runs weekly classes for Thames Valley Pro Taekwondo at The Henley College and Henley leisure centre.

The GB team qualified for the world championships in April. Several men also got through but were too afraid to compete in North Korea because of its increasingly fraught relationship with America.

Mrs Hutchinson was not concerned as taekwondo originates from North Korea and she had always wanted to visit. She was keen to compete at the Taekwondo Palace, a dedicated venue where the national squad trains.

A similar test was conducted on September 15, the day the athletes caught a connecting flight from Beijing to Pyongyang. The President threatened to “totally destroy” the country in retaliation but Kim dismissed him as a “barking dog”.

Mrs Hutchinson said: “We were all frightened but crazy enough to go because it’s the home of taekwondo. It’s not an ideal ‘holiday’ destination but our love for the sport has taken us to lots of different places and I’ve always wanted to go there.

“My family and my husband were begging me to stay at home and it made me think twice because if it all kicked off I didn’t know how we’d get out of the country safely.

“People said, ‘don’t worry, you’re doing taekwondo so they’ll treat you like royalty’ but there was still some doubt. However, in the end we didn’t want months and months of training to go to waste.

“We flew from Beijing in a little plane operated by Air Korea, where we were given a little burger but were far too scared to eat it in case it was dog, rat or cat!

“When we arrived, we had to fill out papers declaring every single item we’d brought, down to the last sock. That’s when we heard about Trump’s threats and I was just thinking ‘please just wait until we get home again’!

“They were very worried about outsiders smuggling in propaganda. Our coach had 40 leaflets promoting Liverpool as a destination for the next tournament and they went through each one very suspiciously.”

The team were introduced to their guides, who would write down every comment they made and every question they asked before reporting back to a supervisor at the end of each day.

Mrs Hutchinson said: “At night they would have meetings and we heard a male guide really shouting at a female one in Korean. They seemed very nervous and keen to ensure we stayed with them at all times.

“I showed one of them some pictures of my holiday in Athens and she took a picture of it on her own phone. They are allowed phones but everything is very tightly regulated. We were even more restricted as our only entertainment was the television in our rooms, which could only receive Korean channels.”

The women were shuttled between the hotel and the stadium on a bus with a police escort that was allowed to cut through red traffic lights. Mrs Hutchinson said: “It didn’t really matter because there were hardly any cars on the roads. Most people seemed to walk or take the bus and there weren’t even that many taxis.

“It was amazing how clean the streets were. There wasn’t a piece of litter anywhere and it felt as though you could eat off them. When we got up in the mornings, there were people on the grass verges cutting them to precisely the same length with scissors. It might seem odd but that’s how their society works. Everyone is assigned a role and they don’t know any other way of living.

“I asked our guide about crime and whether people go to prison for things like stealing. She said there aren’t any prisons in North Korea but people sometimes had to be ‘educated’.”

At about 11pm every evening, the street lights would be switched off and the entire city would go to bed. Throughout the night, loudspeakers on every corner would play songs praising the Kim family.

Mrs Hutchinson said: “I suppose it’s a sort of brainwashing. I asked our guide why nobody went out at night and she acted like it was an odd question, as if she wondered why anyone would do that.

“It was like the computer game The Sims, where you’re a god-like character controlling other people’s lives. It was as though Kim Jong-un pressed a button to put the city to sleep and another to wake it up again. You felt like you were always being watched.

“The architecture was just incredible and they’d obviously copied famous buildings from around the world. We saw buildings that looked like the Shard, the Egyptian pyramids, the old World Trade Center and the Arc de Triomphe. However, the interiors were really old and musty, as if they were decades old.”

Mrs Hutchinson said the food was “horrible” but she and her teammates had to eat it to replace the calories they burned competing and training.

She said: “We had the same meal over and over again and I’ll never forget it. It started with bread, lettuce and cucumber, then pickled vegetables, tofu and some meat which they said was chicken but could have been anything.

“There was a little supermarket in the hotel so we would stock up on chocolate, cookies and chips and take those back to our room. We certainly didn’t get anything like porridge or cereal — they just don’t cater for Western tastes.

“We showed the guide a picture of our manager’s cat and she said, ‘no, we don’t keep them as pets’, though they do eat them.”

Even so, the trip was an “incredible experience”.

Mrs Hutchinson said: “I felt safe and well looked after so I would go back again. My husband also does taekwondo and I’d love to return with him. We didn’t really think about all the international problems, we just saw everyday life going on as normal.

“The tournament wasn’t as well-attended as it might have been because a lot of athletes were too scared to come. We certainly didn’t see any Americans.

“They take the sport very seriously over there — the national team trains full-time and they get their own apartments and other privileges, though they lose it all if they don’t do well.

“We were watched by hundreds of Koreans in traditional dress, although they only stood up or applauded when their team did well. I felt very proud as my final was against a North Korean and I wasn’t far off a win.

“I enjoyed it very much but at times it felt unreal, like a dream.”

⚫ North Korea, officially the Democratic People’s Republic of Korea, has been run along strict Communist lines since the Kim dynasty took charge after the Second World War. It claims to be a “self-reliant socialist state” with free elections but the United Nations and Amnesty International say it has one of the worst human rights records in the world.