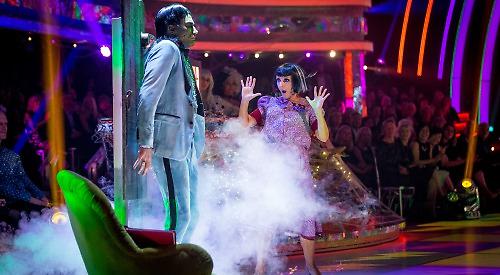 The radio presenter received a standing ovation for her performance on Saturday night’s Halloween-themed live show in week six of the BBC series.

The routine began with McGee in a drab floral dress daydreaming about being a prom Queen and bringing Pernice, dressed as Frankenstein, to life.

To the music of Frankie by Sister Sledge, the pair moved around the dance floor before McGee disappeared behind a locker, which Pernice then twisted round to reveal her in an electric blue flapper dress.

The routine ended with Debbie doing a handstand before being held in the air by Pernice while stretching out her arms and legs.

Bruno Tonioli joked: “Debbie, Giovanni, I am bittlery, bitterly disappointed... there was nothing horrible about that! It was brilliant, absolutely brilliant.”

Craig Revel Horwood critised the “around the world” lift, describing it as a “little bit clunky” and saying it should one clean move.

When Pernice admitted this was his fault, Revel Horwood responded: “It still went wrong, darling. I don’t care whose fault it was but it went wrong.”

But then the characteristcally nitpikcing judge added: “I thought it was brilliant. The cross swivel hand hop, which we never see, the Birdie flap, was absolutely perfect… clean, precise, absolutely incredible.”

Darcey Bussell told Debbie: “It was fantastic — we are finally seeing this naughty flapper in you. I’m absolutely loving the precision, the speed. How you produce those crazy lifts... you are a fearless, agile woman. I loved it, absolutely loved it.”

Shirley Ballas motioned Debbie towards her and said: “I am going to give you my Queen of Latin crown because you deserve it. You were fantastic. I loved everything about what you did. Everything. There was nothing that I didn’t like. You went for it, you executed it. You were brilliant, well done.”

On Sunday’s results show, television chef Simon Rimmer became the fifth celebrity to be eliminated from the show.

He and dance partner Karen Clifton were voted out by all four judges after competing in a dance-off against The Saturday’s girl band star Mollie King and her partner AJ Pritchard.

For more on this story and more pictures, pick up a copy of the Henley Standard, out on Friday.