I'm almost the best in the world at window dressing 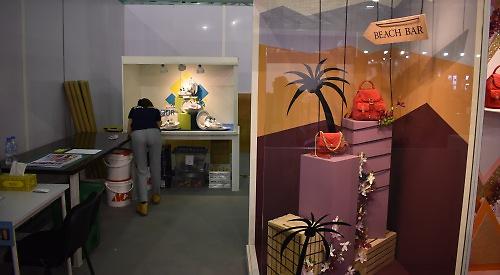 A WOMAN from Sonning Common has been named the world’s second best visual merchandiser.

Catherine Abbott, 21, won a silver medal at the WorldSkills championships in Abu Dhabi.

She had to create a window display in 22 hours for Juicy Couture with the theme of “holiday” and a lifestyle display for a 30-piece dinner set.

She was judged on her drawings, plans and research.

Miss Abbott, who is the visual merchandiser at the Topshop store in Reading, was one of seven medal winners among the UK’s 30-strong team at the event.

She said: “It was a shock but really exciting when I found out I had won a silver medal. I am proud of what I have accomplished.”

Miss Abbott, who lives with her parents Sue and Mark in Wood Lane, grew up in Sonning Common and attended the village primary school and Chiltern Edge School.

After finishing her GCSEs, she studied window dressing and graphic design at East Berkshire College, inspired by a period of work experience as a visual merchandiser at John Lewis in Reading.

She joined a WorldSkills UK international training and development programme in 2013 on the recommendation of her tutor Sue Leadbeater.

WorldSkills promotes and encourages vocational training and education to the highest level.

The championships, which are held every two years, are open to 18- to 25- year-olds and celebrate excellence.

She failed to make the UK team for the WorldSkills championships in São Paulo in 2015 but succeeded this time around when 59 countries competed across 51 categories.

Miss Abbott’s Juicy Couture display featured a handbag and a backpack on raised plinths as well as gold paper, two bunches of grapes and two bunches of flowers, which were compulsory items.

Her dinner-set display was in the shape of a pyramid and the crockery and cutlery were placed on two green cubes.

Miss Abbott said: “Everyone in the competition is given the same materials and you aren’t allowed to bring any in. You have to make the displays around the brief. The skill is your interpretation of it.

“You have to do the design within three hours and your window has to look like it. That’s hard because normally when you’re doing it in real life and it looks weird, you change it.”

She said her training had helped with her job at Topshop, where she has worked for three years. She also sometimes works at the company’s branches in Guildford and Oxford Street.

Miss Abbott said: “I dress mannequins, do window launches and other artwork around the shop floor.

“I wanted to do the competitions as they give you a different way to show your skills.”

She thanked Ellie Ridley, her manager at Topshop, for allowing her to attend training sessions at the London College of Fashion.

She also attended painting and decorating training with Peter Walters, from Stoke-on-Trent College, who taught her different painting techniques.

Miss Abbott said: “I’ve learned more than if I had just gone to college. It has been years and years of training but I’ve come away with a medal.”

Her mother said: “Mark and I are extremely proud of Catherine. She has acheived incredible success and hopefully it will benefit her career.

“She is focused and once she gets an idea or project to work on she spends a lot time on it.

“She used to have a horse and would commit a lot of time to that.”