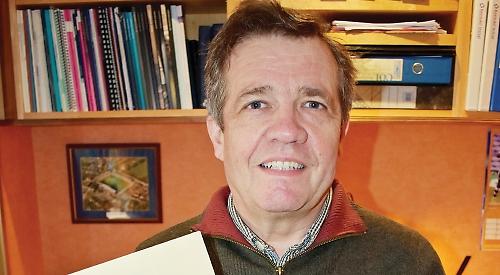 A FORMER chief executive of Waterstones and HMV has been honoured for services to British business and the economy.

Alan Giles, 63, of Crowsley Road, Shiplake, has received an OBE in the New Year’s Honours for his achievements as non-executive director of the Competition and Markets Authority for the past four years.

He was part of a team that recently investigated a “super-complaint” by Which? magazine about misleading pricing among the big four supermarkets, Asda, Tesco, Sainsbury’s and Morrisons.

As a result, the retailers agreed to ensure “multi-buy” promotions always offer better value and make price comparisons clearer and not to increase prices briefly in order to “discount” them again.

More recently, the team has been investigating the prices set by pharmaceutical companies supplying drugs to the NHS and complaints about online hotel bookings and companies that bulk-buy concert tickets and sell them on at inflated rates. Mr Giles, who lives with his wife Gill, received a letter from the Cabinet Office confirming his honour last month.

He said: “I was honoured and a bit shocked to receive it, though I did wonder if it was a practical joke from my drinking friends at the Baskerville as they do have previous form in that department.

“I soon found out it was genuine but I haven’t told anyone apart from my wife yet. She’s delighted and I think my friends will argue that the next round of wines is on me! I’m obviously very happy but I’m proud of the work carried out by all 700 people at the authority and see it as a reflection of all our efforts, not just mine personally.”

Mr Giles grew up in Dorset and studied physics at the University of Oxford before joining Boots as a graduate buyer and marketer, then taking a similar job with W H Smith.

In 1998 he was appointed managing director of Waterstones and then made chief executive of its parent company, the HMV Group.

He stepped down in 2006 to pursue a variety of non-executive and teaching roles.

Until recently he was a non-executive director of services firm Rentokil Initial and clothing retailer Fat Face and he remains an associate fellow of the Saïd Business School in Oxford, chairman of the Oxford Institute of Retail Management’s advisory board and non-executive director of the Perpetual Income and Growth Investment Trust, which is run by Invesco Perpetual.

He was headhunted for a board role with the Office of Fair Trading, which was the Competition and Markets Authority’s predecessor, in 2007. He said: “It was a bit different from what I’d been doing before but the authority looks for people with a range of backgrounds.

“It has experts in law and economics and I suppose I was able to contribute some insights from the business world.

“I understand how business works but I’m also passionate about looking after the consumer and ensuring they get a fair deal. It’s fascinating work and I think we help in some very important areas.

“We’ve recently done a lot of work on care homes for the elderly as more money needs to be invested into that sector. We’ve highlighted how some residents can be disadvantaged as they’re vulnerable consumers by definition and some operators’ contracts are very one-sided.

“There have also been some extraordinary price rises in the pharmaceutical sector for which the NHS and, ultimately we as taxpayers, pick up the bill. Some of the manufacturers have definitely abused their dominant market position.

“The supermarket investigation also got results as we had a specific commitment from one retailer in particular to change certain practices that had been flagged up.”