App for the 'grumpy' commuter 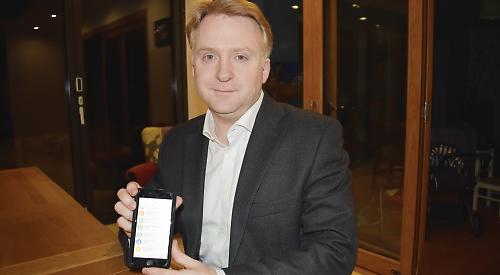 A COMMUTER has created a mobile phone app for his fellow travellers to complain about public transport.

Nick Schutz, 42, of Station Road, Wargrave, created GrumpNow because he was tired of the repeated problems he and his Pippa, 41, have had travelling to work in London.

The app has been downloaded hundreds of times since it was launched late last year.

It allows users of any form of public transport to log a complaint, known as a “grump”, with details of their route, time, operator and nature of their problem.

The anonymous complaints could be about anything from late arrivals or cancellations to faulty ticket machines or a lack of seats.

The data is collected by the app to create a log of all the issues.

Users can also tweet their grump to operators and other people online.

Mr Schutz, 42, commutes every day to the capital, where he works in financial technology, while his wife works as an accountant and is a member of the Wargrave User Group, which campaigns on rail travel for villagers.

Mr Schutz said: “Like most commuters, I got fed up. I’m not as vocal as some but the combination of that and my wife being on the user group and often complaining about services made me think it was a great opportunity to develop the app.

“I don’t believe anything else does data like this. Rail operators provide some but no one captures the voice of the commuter.

“There are millions of commuters every day and it’s an untapped market. There are thousands of people complaining on Twitter every day and we are tapping into that. Commuters are on their phones all the time.”

Mr Schutz first had the idea two years ago but didn’t begin developing the app until October and then spent evenings and weekends on it before releasing it via the Apple Store.

He also plans to create an Android version in order to reach more people.

He said: “I have a day job so this is something I’m doing on the side. The whole idea isn’t to make money but to give commuters a voice and compare relevant data.”

Mr Schutz grew up in Wargrave, where his father Christopher was a Conservative borough councillor who campaigned on the Henley branch line.

He has years of experience of services on the line, where a new half-hourly timetable was introduced by Great Western Railway last year.

The timetable was criticised by Wargrave residents because it originally missed out the village on every other service during off-peak hours but Wargrave station was reinstated as a stop on every service at the end of last year.

Mr Schutz said: “There are still issues at Wargrave. The reliability of the branch line is okay but there are shorter trains in the morning and people often have to stand.

“There are some issues with punctuality with connecting trains at Twyford. Coming home in the last two weeks we have typically all been standing.

“The Henley and Wargrave user groups have been putting pressure on GWR to hold connections but they can’t do it forever. I do believe these are teething problems and things will get better.”

The app uses templates, which allow “grumps” to include the relevant information and prevents users from swearing or using confusing language.

Mr Schutz said it was not meant to be only critical but also to gather information in order to press for improvements.

He said: “The difference here is you are moaning but doing so constructively. You’re not ranting, which is not helpful. I’ve not found any other app that does this.

“One of our benefits over Twitter is that there people are ranting and it’s often in a random format. This is the only solution where you capture all the relevant details of the journey.

“A lot of people who are grumping are not expecting any money back, they just want their voice to be heard.

“There’s immediate gratification when you grump — people say it feels very good and we have a lot of repeat grumpers.”

Mr Schutz says he and his wife are regular users of the app.

He said: “We have the same principle: don’t grump if you don’t need to. We probably do it every other day as a minimum. I won’t do it if a train is one minute late but perhaps if it is six.

“We have two children we have to get home to and when we are late it impacts on them. The babysitter or my mum, who lives in Henley, will have to stay late.

“I know friends and family are using it and a few people I commute with. They have also thrown it out in the Wargrave User Group. People on the branch line have been grumping so word is getting out.

“Train companies do reply to grumps. They are engaging with the platform but not approaching me as a company yet.

“We want to be able to go to GWR and say, ‘82 per cent of people this month complained about standing so perhaps you could put on another carriage’.

“We are focusing on the negative but with a positive at the end hopefully.”