Pond wall is in danger of collapse, says councillor 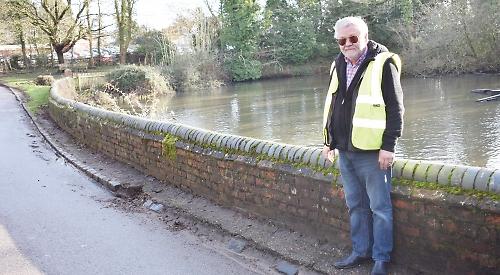 A WALL separating a pond from a road in Sonning Common is in danger of collapse, claims a parish councillor.

Parts of the boundary wall at Widmore Pond, which is believed to date back to Victorian times, are said to be structurally unsound.

Councillor Dirk Jones fears that the whole thing could give away and drivers using Widmore Lane could end up in the water.

But council highways officials insist there is nothing to worry about.

Cllr Jones, who has had the site independently investigated twice in recent months, said it was not safe to closely inspect the wall due to the passing traffic and the uncertainty about its strength.

He said: “We believe the problem is one of historic lack of care of the road surface and drainage and heavy rat-run traffic on a 1.5 car width wide lane wide road next to an 8ft drop to a pond.

“The cost of a road closure and full structural survey of both the road and wall is not within our remit or authority.

“Judging from old photographs, that pond wall has been around since Victorian times when a horse and cart was the norm, not 10-plus ton heavy goods vehicles.”

Cllr Jones fears a car could end up in the pond. He said: “As we so often see, lack of maintenance is not cost- effective and always results in much greater costs later when the underlying infrastructure becomes beyond repair.

“In this case we are not discussing the inconvenience of a pothole or flooding but a possible major structural collapse which may result in a vehicle in the pond and a risk to life.”

He said the road would need to be dug up to investigate the problem.

Councillor David Bartholomew, who represents the village on Oxfordshire County Council, the highways authority, said officers had visited the site and were not concerned.

Speaking at a parish council meeting, he said: “Officers have taken a visual inspection and say the wall looks sound but want to take a structural report from an engineer. The county council can’t provide this as the wall is in parish council ownership.”

Parish clerk Philip Collings said the road could require a “mini version” of the £1.1million sheet piling installed on the A4155 near the Flowing Spring in Playhatch last year.

Councillor Chrissie Phillips-Tilbury said the pond was a hot spot for families with young children.

She added: “There are a good number of children who visit the pond. If the wall is down then a child could fall in.”

Councillor Douglas Kedge said: “This is a health and safety issue. We know there is real danger there and we must do something about it.

Pictures of the damage had been circulated to councillors showing the damage.

Councillor Leigh Rawlins said: “A bit of mortar missing is one thing but if it is taking the weight of the wall itself then it is significant.”

The pond has been in the village since the 17th century. The brickwork is from the Victorian era and passing trains would use it to fill their water tanks. The pond was taken over by the parish council in 1967.

In 1976 parish councillor Dick Denning led a three-year restoration programme, for which it earned an award in a national “save the village pond” competition.

A county council spokesman said: “An officer carried out a visual inspection of the wall which did not identify any cracking, from the road side of the wall, that would cause an imminent failure.

“We have advised the parish council to undertake a full structural survey to ensure the stability of the wall.”

• Sonning Common Parish Council is to receive 0.74 hectares of “back pond land”, an area off Widmore Lane belonging to Blounts Farm, which is being sold by Robin Thorne.