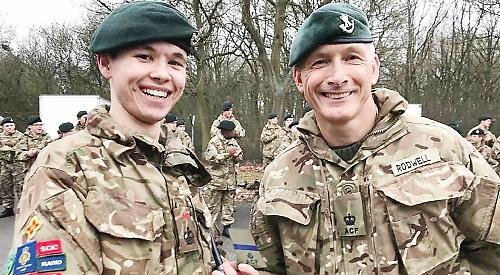 A TEENAGER achieved the highest rank for an army cadet before having to leave the force because he is too old.

Matthew Case was named cadet under officer with the Henley cadets (The Rifles) Nivelle Company in recognition of his dedication, commitment and ability in cadet activities.

Then on Wednesday he left the detachment, which is based in Friday Street, because he turned 18 — the top age limit for cadets — last week.

Matthew, of Gainsborough Crescent, Henley, said he was proud of what he had achieved and would have preferred to stay on.

“Leaving is very emotional as the cadets have been a part of my life for almost five years and and have become like family.

“My last rank was really nice to have, even though I had it for a short time.

“To reach a high rank you need to have good moral standards and the ability to accept leadership.

“You are expected to teach younger cadets because they look up to you.”

Matthew joined the cadets in April 2013 and quickly flourished, winning awards and promotions regularly for showing the right attitude and making an effort.   In 2015 he was appointed the Mayor’s cadet for Councillor Lorraine Hillier’s year in office.

Last year he was awarded the Fenshawe Plate, which is presented to the cadet who achieved maximum commitment in all aspects of cadet activities throughout the year.

Matthew, who is a former pupil of Sacred Heart Primary School and Gillotts School and now attends The Henley College, said his most enjoyable time as a cadet was going on a camp in 2016.

He recalled: “I was part of a group of cadets who had no contact with the outside world for five days. We were guarding a barn 24 hours a day. It felt so realistic. We had to carry out 24-hour patrols while trying to keep morale up.

His proudest moment came when he was made a master cadet following a week-long training course at Frimley Park with other cadets from around the UK.

Matthew said: “At the end of the course you get a report and I got highly competent, the highest grade. That was really satisfying.” He also enjoyed attending events, such as the Remembrance Sunday service in Market Place, and collecting for the Poppy Appeal.

Matthew said: “Being the Mayor’s Cadet and having the privilege of speaking to the whole town at remembrance was something I will always remember.

“Being Henley born and bred, it was nice to able to give something back.”

Matthew, who lives with his father Graham, a window cleaner, mother Carole, a secretary, and 16-year-old sister Laura, who also goes to The Henley College, is currently studying for A-levels in biology, psychology and photography.

He had considered a career in the army but now hopes to secure an apprenticeship instead.

Matthew said he had enjoyed his time with the cadet force and would recommend that other youngsters try it because it is so rewarding.

He said: “I have come out of the cadets a completely changed person for the better.

“I thank the Army Cadet Force so much for allowing me to have the opportunities to get moral courage and to do the things I wouldn’t otherwise have done.

“For anyone in the cadets I would advise them to stick at it and to those thinking of joining to do so — you will look back and remember it for giving you some of the best moments of your life.”