Safety lights installed at school where boy was injured 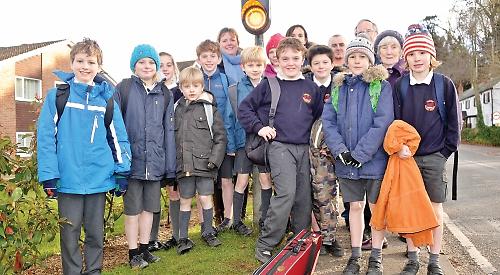 TWO safety lights have been installed on the road outside Goring Primary School after a pupil was knocked down by a car while crossing.

The lights, which have been placed about 200 yards either side of the school entrance in Wallingford Road, are illuminated during the morning and afternoon school runs, when an advisory speed limit of 20mph applies.

There is also a triangular sign warning motorists to watch out for children.

These replace the old 30mph “radar” signs which lit up if drivers approached them too quickly. These dated back to the Nineties and were deemed to be no longer effective.

The lights were installed by Oxfordshire County Council, the highways authority, at a cost of £2,640. Half the money was raised by the school’s parent-teacher association and the remainder was donated by the Goring Gap News magazine and the organisers of the annual Hairy Legs fun run.

The parish council will be responsible for maintaining them.

Parents began a safety campaign after an incident in September 2016 in which a boy was struck while he and his family were crossing Wallingford Road near the junction with Lockstile Way.

A driver heading north stopped to let the group cross but was struck by the car behind and pushed forwards into the child, whose leg was broken.

Originally, it was planned to have solar-powered warning lights but the county council said these would cost £10,000 and suggested the mains-powered lights instead.

School governor Claire Slade, who led the campaign, said: “It’s fantastic that everything is up and running.

“It has been a real community effort and I’m so proud of how we all pulled together to get the job done. We’re really grateful to the parish council, the Goring Gap News and Hairy Legs for their support and to all the parents and children who raised money.

“It has been more than a year in the making but the county council says this is the best preventative measure and we’re thankful for their advice.”

Parish councillor Emrhys Barrell said: “This is a good example of councils and the community working together. The energy cost is next to nothing and the lights will benefit all pedestrians who walk past the school.”

Paul Bradstock, chairman of the Goring Gap News Association, said: “The small surplus generated by our voluntary teamwork is used to support causes that benefit the community and we’re pleased to have been able to support the school traffic scheme to improve safety for the children.”