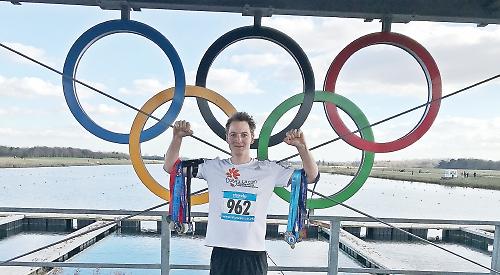 A MAN who hated running as a schoolboy has raised just over £1,800 for charity by taking part in 20 races.

James Richardson, 23, from Peppard Common, ran a total of 200 miles between March last year and February 20, when he completed his final event, the Dorney Lake half marathon.

He was supposed to finish in November but pulled out of his last two races after suffering a knee injury.

However, he was determined to complete the challenge so he entered two more events once he had recovered.

James had set out to raise £1,000 for Daisy’s Dream, which provides support for children and families affected by bereavement or serious illness, but his final total could be more than double that once the charity claims Gift Aid.

The money includes a £500 donation from the Oratory School in Woodcote, which her attended.

James will return to the independent Catholic boys’ school over the summer to talk to today’s pupils about his experience. His first event was the Ridge Off- Roader 10km near High Wycombe and subsequent races included the Henley 10km trail run in May, the Chiltern Chase 10km at Ewelme in June and the Henley half marathon and Frieth Hilly 10km in October.

The self-employed carpenter who lives with his parents, Robert and Alison, disliked running as a teenager.

However, he took it up again in 2016 and finished that year’s Water of Life half marathon in Marlow in one hour and 45 minutes.

He continued to train at least four days a week and his performance improved until he completed the Great North Run in a personal best of one hour and 34 minutes.

However, he began to suffer from “runner’s knee”, a condition caused by inflammation of the joint due to overuse, which became progressively worse despite resting between races.

When he entered the Marlow half marathon in November — his 19th race — he was unable to finish as the pain became unbearable.

James sought help from Active VIII physiotherapy in Henley, which helped him recover and taught him stretches and strength exercises to reduce the strain on the joint in future.

He then ran the Watford half marathon on February 4 before completing the Dorney Lake race in one hour and 36 minutes. He was cheered over the finish line by his parents and girlfriend Sophie Beckett.

He said: “It was an amazing feeling to finish, not just because of the achievement but also because of all the support I received. I was overwhelmed by the amount of money that was donated and never expected to hit my target, let alone raise so much.

“I definitely want to carry on running and have already registered for the Reading half marathon later this month. I’ve also got one eye on doing some triathlons. I love the fact that running is less about talent and more about dedication. If you put the hours into it, you will see the result.”