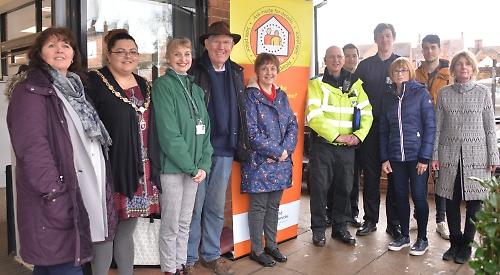 NINE organisations in Henley have signed up to provide a safe place for people who feel lost, worried or threatened.

The Safe Places scheme has been launched by the South and Vale Community Safety Partnership, Oxfordshire Family Support Network and Age UK Oxfordshire.

People can request a special card which has details of someone to contact if they need help when they are out and about or they can go into one of the participating locations and ask for help.

They will be given a Safe Places logo to display in their window and their staff will receive specialist training by Oxfordshire Fire and Rescue Service, which will also monitor how people are using them. The scheme will be promoted in schools and The Henley College to vulnerable young people.

Paul Barrett, chairman of South Oxfordshire Mencap, welcomed the scheme. He said: “It provides a secure environment for all vulnerable people and not just folk with learning disabilities. It can help anyone who feels threatened and needs somewhere to go where they know they will feel safe until whatever made them feel threatened has gone away.”

The scheme was officially launched at Waitrose on Thursday last week. Police and firefighters spoke to members of the public about the scheme and gave out leaflets.

Jan Sunman, a volunteer from Oxfordshire Family Support Network, which supports the families of people with a learning disability, said: “Safe Places enable anyone who feels vulnerable while out in the town to have greater confidence to go out.

“People with learning disabilities can feel very vulnerable and lacking in confidence when they go out because, sadly, they are frequently bullied and harassed. This is why our charity values this scheme.”

To request a Safe Places contact card or if your organisation is interested in becoming a safe place, call 01235 422593 or email communitysafety@southandvale.
gov.uk