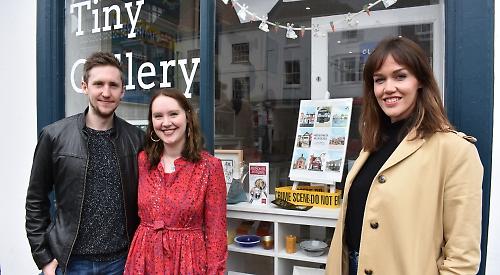 AN artwork inspired by the Henley locations featured in Midsomer Murders has gone on display in the town.

The Tiny Gallery in Hart Street is selling prints of the piece that features eight places used for filming the ITV crime drama series.

They include Henley Bridge, the town hall and Gabriel Machin butchers in Market Place.

Each image has the name of the location and the episode in which it featured. Artist Hannah Elizabeth created the piece to tie in with the relaunch of the Midsomer in Henley tour for the new visitor season.

The tour is run every weekend by Henley Hosts and visits the locations in the artwork.

Emma Piercey-Fisher, who runs the gallery with husband Josh, said: “I was in a town council meeting when they were talking about the launch of the Midsomer tour and I thought it would be good if people could take home something to remind them of it. I immediately thought of Hannah, who does local landscapes.”

Miss Elizabeth, from Caversham,
said her works were inspired by old railway posters.

“I make them for a lot of locations around Oxfordshire and Berkshire,” she said. “I take photos and then do them on a tablet.”

The tour take places weekly until the end of October, except during Henley Royal Regatta week. It begins at the Argyll pub in Market Place, which featured in the episode Last Year’s Model, which was broadcast in 2006.

The tour passes the gallery where the artwork is on display in the window, which is decorated with police crime scene tape.

Mrs Piercey-Fisher, from Shiplake, said: “We’ve already had a few people looking in the window wondering what it is.”