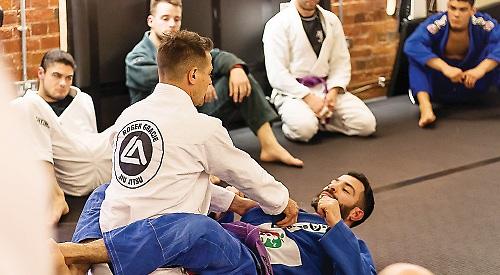 Roger Gracie was invited by founder Paxton Gibbons to mark the launch of RGA Henley.

Mr Gibbons, of Valley Road, Henley, earned his jiu-jitsu black belt under the teaching of Mr Gracie and his academy is affiliated to the champion.

Mr Gracie, 36, a fourth-degree black belt originally from Rio de Janeiro, is considered to be one of the best jiu-jitsu competitors of all time and is a member of the world’s most renowned and influential martial arts family.

Brazilian Jiu-Jitsu, often dubbed “the gentle martial art”, is a technical system of self-defence that uses strength, leverage and weight distribution to overpower an attacker on the ground.

Mr Gracie said that jiu-jitsu appealed to people of all ages and sizes because it involved a grappling style of fighting without the punching and kicking used in other martial arts.

He said: “It’s the most enjoyable and the most real martial art you can do.

“You have the full form of fighting without the striking, so anyone can do it from the four-year-old to the 70-year-old.

“The oldest student that I had in my gym in London was 86 and he was training like everybody else. He was doing the same techniques.

“You can fully train without getting hurt because you don’t need to hit someone.

“If you take the striking out of it there’s no restrictions. Jiu-jitsu is the most enjoyable and it’s the safest — that’s why it’s so popular.”

He said: “I’ve been fighting my whole life. Now I want to see more people training and hopefully I can change people’s lives through jiu-jitsu. I have a big school in London and I want to open more.

“Paxton has been training with me for years. He’s a perfect example of jiu-jitsu changing people’s lives.

“He’s doing this because he loves jiu-jitsu, he loves training, and to see him going in that direction is very fulfilling.

“He’s not just my student, we’re friends, so seeing him doing this, it’s a great feeling.”

Mr Gibbons said: “I’m really happy that I’m now teaching in my home town. Roger is my teacher and my friend and he’s a martial arts legend, so having him here on opening night means a lot to me.”

He offers adult classes on Tuesday and Thursdays with a beginners’ session from 7pm to 8pm and an intermediate session from 8pm to 9pm. For more information, visit ww.rgahenley.co.uk