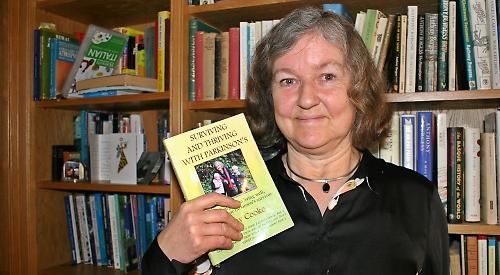 A RETIRED teacher who has suffered from Parkinson’s disease for almost two decades has written a book about it.

Briony Cooke, of Holmlea Way, Goring, says she wants to dispel the image of “old men shuffling around” and stress the importance of staying optimistic in the face of the degenerative brain condition.

She was diagnosed in 2000, when she was just 47, after experiencing years of symptoms, including faintness, stiffness in her back and neck, a tremor in her left hand and difficulty writing.

Mrs Cooke had consulted a chiropractor and osteopath and even underwent shoulder surgery as doctors initially believed the cause was a joint problem.

However, her problems persisted and she was referred to a neurologist on the advice of her physiotherapist, who feared it might be Parkinson’s.

This was confirmed following a series of consultations at the former Battle Hospital in Reading.

Mrs Cooke, who was then head of geography at The Henley College, says there was little support then or in the years that followed when her symptoms fluctuated and she underwent various treatments.

She wrote the book, called Surviving and Thriving with Parkinson’s, so others in a similar position would not feel similarly isolated.

It was published on Wednesday, which was World Parkinson’s Awareness Day, and she promoted it by signing copies at the village community centre yesterday.

Mrs Cooke is married to Henry and has three children and two grandchildren, Sebastian, four, and 21-month-old Edith, who are pictured with her on the book cover.

She said: “Parkinson’s is an insidious illness and the symptoms creep up on you slowly, so it’s easy to dismiss it or mistake it for something else. However, it had got to the point where I couldn’t write on the board and I had to go the doctor.

“It took a while to confirm because there aren’t any definitive tests for it and other conditions like tumours have to be ruled out first.

“When the consultant said it was Parkinson’s, he couldn’t answer any of my questions about how it would progress or affect my life. As I was leaving, he said, ‘I’m so sorry’ and I thought ‘oh dear, this must be bad’.

“I’d have appreciated having a nurse on hand to answer questions and things like that. They handled it very badly because after dropping the bombshell there was nobody to pick up the pieces.”

Mrs Cooke continued working until 2006 when she retired on the grounds of ill-health, but she suffered years of worsening anxiety, especially in public places.

She would become self-conscious when inputting her PIN at the supermarket checkout due to her tremors and would often need to be accompanied by her son Christopher for reassurance.

In 2003 she began taking Levodopa, which increases levels of dopamine in her brain. The disease is caused by a shortage of this chemical, which regulates mood and movement.

Mrs Cooke said: “That drug more or less fixed everything — it was as though a tight vice had been removed from my shoulders. There are some side effects but it definitely works.

“I managed to teach for a while longer and carried on taking kids on overseas field trips, which was pretty crazy as there were some demanding tasks like digging holes and wading through rivers. Eventually though, I’d just had enough.”

After retiring, Mrs Cooke occupied herself by writing textbooks for students sitting the International Baccalaureate, for which she was deputy chief examiner.

She also campaigned on behalf of various Parkinson’s charities and founded a West Berkshire support group, which is still going and has about 18 of its original members.

By 2013 her symptoms had got worse and at one stage she was even unable to stand after bending down to pick something up off the floor.

She went back to her doctor and the following year underwent a procedure in which two electrical probes are inserted into the brain and connected via wires in her neck to a portable control unit.

These transmit a current to certain parts of the brain, exerting the same effect that dopamine would in a healthy person.

Mrs Cooke said: “It changed my life significantly. It’s not a cure but it got rid of the worst symptoms.

“I remember the thrill of being able to use the bathroom again without help. I can’t walk great distances but my balance is much better and I don’t freeze up.” Despite her condition, she remains upbeat and says a positive attitude is the key to coping.

She walks short distances regularly and recently joined the choir at St Thomas’s Church in Goring.

Her book not only provides practical information but also illustrates the human side of the illness with blog posts she has written over the last decade and personal anecdotes from other sufferers.

Mrs Cooke said: “When I was diagnosed, I wanted to read something written by people who had actually lived with Parkinson’s.

“There are plenty of books written by doctors, for doctors, but none that sums up what it’s like on a day-by-day basis or explains the struggles with everything from getting in and out of bed, bathing and using the loo to exercising and managing your emotions.

“I also wanted to dispel a few myths as Parkinson’s is typically illustrated with stock photos of very old men shuffling around but women get it too. The age of onset is getting younger and symptoms like tremors don’t happen to everyone.

“I know I’m going to go downhill in a few years’ time but that’s just the way it is. It’s important to stay optimistic and have plenty of distractions to keep your mind off it.

“I always feel 100 times better after singing with the choir as it releases endorphins, which are a natural mood booster.

“The book wouldn’t have happened without the support of my friends and family, who helped with everything from drawings and designing the website to proof-reading. The project has brought us closer together and I’m so glad I went ahead with it.”