I’d like to teach world to play, says dyslexic inventor 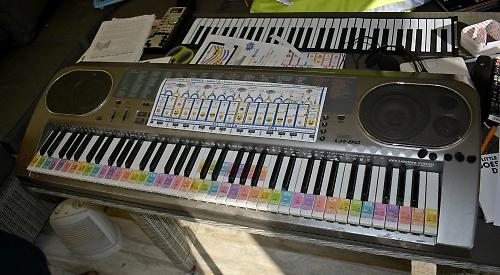 A DYSLEXIC man has invented a system for teaching the piano to people with learning difficulties.

Emoji-Go is based on standard musical notation but assigns the colours of the rainbow to each of the seven notes from A (red) to G (violet).

These are illustrated with emojis, the smiley-faced characters used in text messages and on social media.

Inventor Kevin Thomson, 67, from Peppard Common, came up with the idea as he had struggled to learn to play the piano as a child.

He couldn’t read sheet music or relate it to the keyboard and became confused because they are both black and white, which he later discovered was a symptom of undiagnosed dyslexia, dyscalculia and attention-deficit hyperactivity disorder.

The first two conditions make it difficult to understand text and numbers respectively while the third can cause a loss of concentration.

Six years ago, Mr Thomson attempted to get back into music by learning the guitar but found he struggled as he had with the piano.

He tried teaching himself using tablature, a system that uses numbers to tell players which frets to press, but still struggled.

Then he found a solution by sticking coloured dots to each fret and colouring in conventional sheet music so the notes on the page corresponded to his fretboard.

Mr Thomson realised this could help other people like him so he began adapting the system for the piano, which is easier to teach as the white keys are arranged alphabetically in octaves (A to G).

He spent two years relearning the piano while developing his system and then he incorporated emojis, devising a different name and character for each note.

His adapted keyboard has a coloured sticker for each key so that students learn chords, scales and tunes in the key of C, which uses only the white notes.

They can then master the “three chord trick”, which involves pressing three white keys with the thumb, middle and little finger of the right hand in a shape nicknamed “Claude the crab”.

Students can then play along to thousands of songs that only use three chords, ranging from
Kumbaya and Happy Birthday to the Beatles’ Twist and Shout, Johnny Cash’s Ring of Fire and All The Small Things by punk band Blink-182.

Mr Thomson says this boosts pupils’ confidence and encourages them to continue learning.

He said: “If I said you could learn 1,000 songs in five minutes, you’d think I was mad or it was impossible. However, those chords underpin so many tunes and once you’ve picked that up, you’ve got a little trick you’ll want to show your friends.”

They can also improvise melodies over a backing track by experimenting with different combinations but starting and ending each phrase on a given note.

This lends their playing a particular emotion. For example, starting and finishing on C gives an upbeat feel so that note’s emoji is Happy. D is named Folksy for the same reason while E is named Gypsy, F is Jazzy and G is Rocky.

A is named Truly Madly Deeply as it forms a minor scale, which is commonly used in love ballads, while G is named Crazy because it sounds discordant.

The next step is to play in other keys, which is more complicated because they substitute certain white notes for black ones, which are “flats” or “sharps” as they fall halfway in pitch, or a semitone, between the lettered notes.

For example, the key of G major omits F but includes F sharp while the key of E major discards F, C, G and D for their sharp equivalents.

To help students follow this visually, every white button on the keyboard is covered in velcro and black dots are stuck on those which should not be played.

Mr Thomson, who has worked in marketing for decades and published several books on the subject, first exhibited Emoji-Go at the British Educational Training and Technology Show in January and says it was well-received. He is now in talks with a company to produce interactive slideshows and videos to accompany it as well as books that illustrate different techniques and principles.

He has also applied for a patent and is trialling it on a number of volunteers. He will make adjustments accordingly before seeking investment to market the system. He says anyone can benefit from it, not just those who have learning difficulties.

Mr Thomson said: “Emoji-Go works on the 80 to 20 rule — if you can make learning easier for the 20 per cent of people who have some kind of difficulty, how much better will it be for those who don’t?

“Music is a ‘whole-brain’ activity that combines the logical areas dealing with subjects like maths and the creative areas that deal with the arts. It creates new neural pathways so it helps your entire education.

“I see it like a language. You can start from the bottom by learning vocabulary and grammar by rote or you can just immerse yourself in it and pick it up naturally. I find the second way quicker and more motivating.

“Emoji-Go works even if you’re severely disabled and can only use one finger at a time. There’s a real social element to this and people can quickly pass it on to others. You can get children doing duets with their friends in no time.”

Mr Thomson grew up in Canada before his family moved to Britain when he was about 10. He started learning piano when he was five but gave it up at 12 as he found it hard.

He said: “The critical thing with music is that you have to be able to read ahead but that’s practically impossible if you’re dyslexic.

“I got to grade five but by the end I was just learning the finger positions mechanically. I’d play Für Elise in exams but it was all muscle memory and I wasn’t actually reading the music.

“That black and white keyboard just freaks me out and when I look at regular sheet music the notes just start jiggling all over the place.

“The only visual aid I recall was Charlie C and Doggie D. There are lots of books with characters for children but they’re tinkering around the edges and don’t change the system on a deeper level.

“Emoji-Go has been through thousands of different versions as I’ve sorted out what works and what doesn’t.”

Mr Thomson’s daughter Elle struggled to play the violin as a girl.

He said: “Her teacher stuck coloured dots to the fingerboard, which was a good idea but didn’t address the problems with sheet music. She couldn’t link the finger positions with what was on the page.

“The motivation has never been just about helping myself. It was always about sharing it with others, although I was delighted to get back into piano after seven lonely years in childhood failing to pick it up.”

His wife, Sally, 60, learned the piano between the ages of seven and 15 and also gave up at grade five and later discovered that she was dyslexic.

Mrs Thomson, a criminal law barrister in Reading, said: “As with Kevin, it reached a level of complexity that was just too much. The classical system is wonderful in many ways but it also inhibits you from messing around and picking things up by ear.

“Techniques like the three-chord trick will teach you a lot of songs quickly and you can actually enjoy yourself, which is great as not everybody wants to go through the grades.

“I act as Kevin’s sounding board — he has a very complex mind and I encourage him to refine his ideas so that they’re as straightforward as possible.”

At the moment, Mr Thomson is developing a version of Emoji-Go for “flexible pianos”, which are electronic keyboards made from silicone that can be rolled up and stored away.

They cost as little as £25 so are popular with organisations with a small budget. He has also adapted the system for toy pianos, which typically have fewer keys and are aimed at younger children.

He said: “I’m looking to go global with this. We live in a global society and if you’re going to come up with a process like this you may as well aim for that.

“Some teachers at the trade show overlooked us because they don’t see the relevance of music to the core curriculum. In their minds it’s a subject you do ‘over there’ in a different department and it’s not their responsibility to encourage it.

“However, children absolutely loved it because they only needed the bare minimum of teaching before they could get on with
playing.

“It’s a hugely encouraging start, although we face a daunting task as we’re trying to change a 1,000-year-old system.

“We expect our fair share of detractors but it’s not a question of either-or. The traditional system works for many people but this makes it easier for those who struggle.

“I just want to teach the world to play and I certainly wish a system like this had existed when I was younger.”

Mrs Thomson said: “This has massive potential and there’s so much good it could accomplish.

“Kevin is remarkably creative and now we just have to ‘bottle’ it and get it out there in a digestible form.

“It’s about opening doors for people and giving them a sense of self-worth and achievement.”