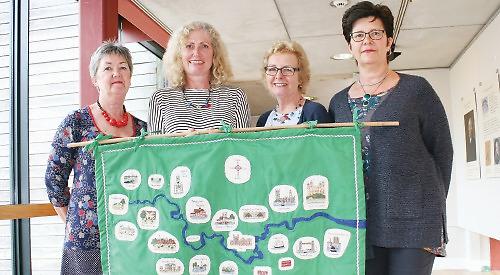 KNITTED and hand-stitched goods created for a community project have been donated to the River & Rowing Museum in Henley.

Artists from the Thames Path Together scheme, which decorated Whitchurch Bridge with the items for charity last year, presented them to staff from the museum’s education department on Tuesday.

They included a basket full of knitted characters enjoying a picnic with woollen teapots, cakes, sandwiches and fruit, which will be used in role-play scenarios when younger children visit on school trips. They will also be used to teach healthy eating.

There was also a tapestry showing landmarks along the River Thames from its source in Gloucestershire to the sea. This includes cross-stitch badges depicting Henley Bridge and St Mary’s Church as well as the mill at Mapledurham.

The goods were made by volunteers at a series of workshops led by Gill Williamson and Alison Livesey, from Whitchurch, and were attached to the village toll bridge for two weeks in April and May last year.

The “yarn bombing” stunt raised £5,000 for dozens of local causes and was visited by thousands of people. Earlier this year, several panels from the exhibition were displayed in the museum’s community gallery. Mrs Williamson said: “It’s brilliant to know that children are going to carry on benefiting from the effort we put in.

“It was great to see our items in the gallery and they were actually at a slightly better viewing angle than they were on the bridge.”

Jan Wallbanks, who contributed the knitted figures, said: “It was magical to see the bridge decorated with so much colour.

“It was hard work but well worth it and I’m very proud that the museum was interested in them.”

Amana Winchester, who was one of four people who made the tapestry, said: “It was good fun to work on it and very inspiring to see so many people coming together. We’re very pleased that it will still be used in future.”

Helen Cook, the museum’s head of education, said: “I’m thrilled to be receiving these donations and will be putting them to use with visitors of all ages. They’re very tactile so they will make learning more enjoyable for the many children who come here.”