Village going for another gold in Britain in Bloom 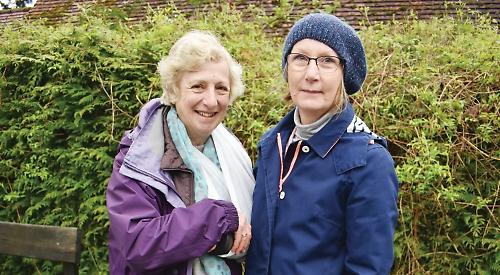 MEMBERS of Goring Gap in Bloom raised £1,420 towards improving the appearance of the village with a plant sale.

The event, which took place on Rectory Garden on Saturday, made £710 from the sale of flowers, herbs and vegetables grown in supporters’ gardens.

The total was matched by the Gatehampton Trust, a long-standing supporter of the scheme.

Volunteers from the Withymead nature reserve, near South Stoke, ran an information stall while trustees of Goring village hall served soup and hot drinks and raised £144 towards the building’s upkeep.

Organiser Stephanie Bridle said: “It went very well, all things considered. The weather wasn’t on our side as it was cold and damp and we didn’t have quite as much to sell because growing conditions haven’t been ideal this year.

“However, we still had a lot of interest and consider it to have been a success as we raised our profile and brought in money for the projects we’ve got lined up this summer. A lot of people came to find out more about planting and gardening generally, which was positive.”

On Sunday, Goring Gap in Bloom members spread three lorry-loads of manure from Gatehampton Farm on the embankment beside the eastern platform at Goring station, which was planted with shrubs and hedges last year.

Mrs Bridle, who lives in Cleeve Road with her husband Ron, said: “It’s good organic muck which should keep the plants healthy.

“The spreading took all morning and was smelly work but hopefully it should keep the kids off!”

Next weekend, the group will plant up 46 hanging baskets with a mix of red geraniums, purple verbena and orange bidens.

These will be then left to grow in the Bridles’ greenhouse for about a month before being hung around the village in readiness for the judges’ visit for the Britain in Bloom competition this summer.

The committee intends to improve the planting around the BT telephone exchange off Station Road, where it created a wildflower meadow last summer.

It has successfully campaigned for the wire mesh fence around the boundary of the property to be replaced with a more attractive one.

Members will plant extra shrubs on the station embankment, which was still awaiting work when the judges visited last year, and install a lavender hedge at the boundary of the village allotments and the Wheel Orchard car park.

They also hope to plant or hang flowers at the pavilion in Gardiner recreation ground, which re-opened following renovation last year.

Mrs Bridle said: “We’re very pleased that more people are taking the initiative to ‘pretty up’ their own properties so the village should look beautiful.

“We have some further plans for the station but these are at an embryonic stage and would need permission from various authorities.

“Nothing stands still in the gardening world — there are always improvements to be made and we’re very busy making as big a difference as possible.

“We’ve got six more hanging baskets this year and we’ve changed the contents from the usual petunias to something more colourful. It’s really important to be creative and show a bit of imagination.

“Barring any major pestilence like a slug invasion, we’re feeling confident. If we have any problems over the next few months, we’ll deal with them.

“We know that two of this year’s judges have visited Goring before but it was some years ago so hopefully they will notice all the improvements we’ve made since then.

“We will also show them some of our wonderful environmental groups like Withymead. One thing the judges noticed last year was the poor condition of some street furniture so we shall be reminding the relevant councils about that. They must think we’re the biggest nags but it’s important.”

The group was expected to be featured in last night’s episode of Britain in Bloom, which follows 15 communities as they prepare for judging and was filmed last summer.

Mrs Bridle said: “We’ve been watching it from the start and it’s interesting to see how different Bloom initiatives are slowly gathering momentum.

“It took us a while to build up the necessary relationships but I think the parish council really appreciates the value of what we do and can see the benefits.

“There are some differences, for example, Shrewsbury has a £250,000 budget for plants, which is on a totally different scale, and not all of them are as focused on sustainable and bee-friendly planting as we are.”

Since its first entry in 2012, Goring has won three gold awards, including one last year, and two silver gilts in the Thames and Chilterns regional competition.

Volunteers are needed to water the hanging baskets once they are up. Anyone who is interested should call Mr and Mrs Bridle on (01491) 875283 or fill out a contact form at www.goringgapinbloom.org.uk