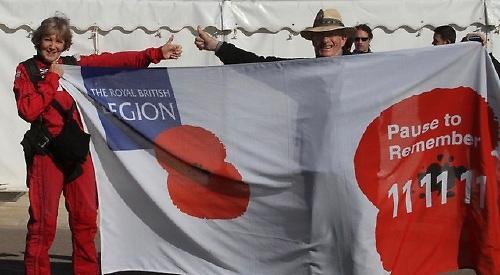 A CHARITY volunteer who completed a 14,000ft skydive to raise funds says it was one of the best experiences of her life.

Mollie Jeffrey made the jump at Old Sarum Airfield in Salisbury to raise money for the Henley and
Peppard branch of the Royal British Legion.

Mrs Jeffrey, who is branch membership secretary, was strapped to Corporal Nathan Connolly, a member of the Red Devils, and was watched from the ground by branch members including chairman John Green.

She was persuaded to take on the challenge after talking to paratrooper Carlo Sisi at the launch of last year’s Poppy Appeal in Henley.

Mrs Jeffrey, from Harpsden, said: “It was an overwhelming experience as those who’ve already done it with a lot less fuss know already.

“It really did seem a huge thing to me even though I felt pretty calm immediately beforehand.

“It just is a pretty strange thing to be hanging outside a plane at 14,000ft waiting to fall out, tightly attached to my handsome Red Devil.

“The views on the way down were tremendous and my loyal supporters gave me a round of applause when I staggered back to them on terra firma. It took 12 hours for my ears to unpop and 24 hours to stop shaking!”

Mrs Jeffrey, whose father was in the RAF, was wrapped in a Legion flag after landing and presented with a trophy and a Parachutist Badge, a military badge issued to paratroopers, belonging to Maj Sisi. She said: “Carlo was the one who first inspired me to do the skydive through his extraordinary enthusiasm and his own bravery.

“It has been one of the highlights of my life and so once again a huge thank-you to everyone for their donations.”

She has raised more than £3,000 so far. To make a donation, visit www.justgiving.com/Mollie-Jeffrey