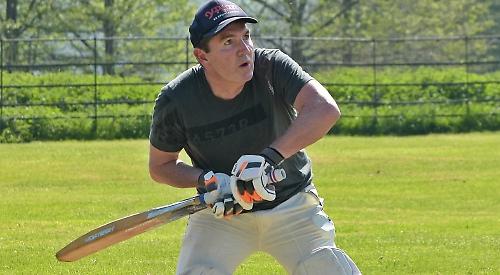 A VILLAGE cricket club raised more than £1,400 for charity by breaking four Guinness world records in a day.

Members of Turville Park staged a special Twenty20 match against London Barbarians which kicked off by setting a new record for the longest run-up. This was set by Charlie Beardall, 24, whose brother Sam, 34, organised the day.

He started at the Chiltern Valley Winery in Dudley Lane, between Skirmett and Southend, and was alerted by phone when the umpire started play. He then ran 4.99km along the main roads to the club grounds at Turville Heath.

An observer followed him the whole way on a bicycle and recorded the run on video as evidence for judges at Guinness, who will confirm whether the attempt was valid within the next six weeks. The current record is 3.1km.

The match, which took place on May 6, continued as normal and was closely won by the London team by about four runs. Afterwards, the two sides set a second record for the most consecutive balls hit in 60 seconds.

Peter Briffett, who lives in Turville, was batsman while the rest of the players lined up at the opposite crease and bowled at him in quick succession. After about five failed attempts he hit 24 in a row, breaking the previous record of 20.

Next up was a bid to get dressed in full batting gear of two pads, two gloves, an arm guard and helmet as quickly as possible. James Bush, of Turville Heath, managed it in 52 seconds, beating the previous record of 78 seconds.

Finally James Hunt, of Stonor, and former Henley resident Oliver Thornton managed 45 consecutive catches in 60 seconds as they stood 10m apart throwing a ball back and forth. This was 15 more than the previous record.

The club also tried to set records for most consecutive balls to hit the stumps and fastest time to fit a batting grip but failed to achieve these.

The afternoon, which wrapped up with tea and a barbecue, raised about £400 on the day and more than £1,000 in online donations for Chance UK, beating Mr Beardall’s target of £1,000.

The charity, for whom he volunteered as a mentor in 2014, offers early intervention programmes for young people who are at risk of being excluded from school in London and other cities.

It encourages them to learn new skills and helps them become more confident, which reduces the risk of falling into a life of crime.

Mr Beardall, a technology project manager who grew up in Maidensgrove, said: “We’re pretty confident that our bid will be accepted. You have to tick a lot of boxes but we understood what was expected of us and made sure we met it.

“We had professional umpires and scorers as it had to happen as part of a genuine cricket match with two full teams in their proper starting positions. We took a lot of videos and photographs so it’s fully documented.

“I couldn’t be happier with how it went. The sun was shining, we raised more than we expected and would have been happy with even one record so to get four was amazing. I’m delighted and ecstatic.

“We aren’t too bothered about the ones we missed as we soon realised hitting the stumps enough times would be impossible — the record is 24 and the most we got was two!

“The money raised will help young people who are at risk to spend time with positive role models who are often absent from other areas of their lives.”