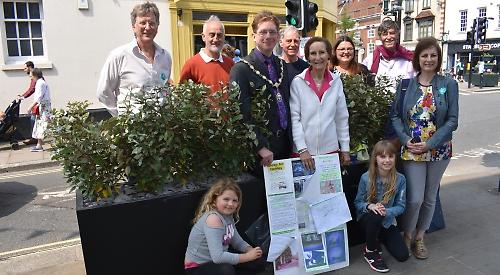 SHRUBS are set to be planted in Henley town centre to tackle air pollution.

The plants have rough leaves which catch pollutants from exhaust fumes. These are then washed away when it rains.

Two planters were installed on the corner of Hart Street and Duke Street on Saturday for a trial. Councillor Stefan Gawrysiak said: “We want to know what people think.”

Mayor Glen Lambert said: “Planting trees and shrubs is a very simple thing that anyone can do. It can only do good to suck up particulates.

“It’s also good for wildlife and the town’s economy as it makes it look nicer and with more of them it will look even better.”

This was one of a number of measures designed to improve air quality in the town centre, where levels of nitrogen dioxide in some streets are 50 per cent higher than Air Quality England’s target limit of 40 micrograms per cubic metre.