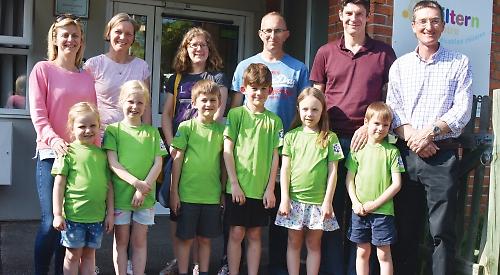 FAMILIES who raised money for the Chiltern Centre for disabled children in Henley have been given a tour of the premises.

They completed treks on Exmoor of either 12km, 17km or 21km in an event organised by the Children’s Challenge, a not-for-profit organisation based in Shiplake.

Pupils from Shiplake Primary School, Trinity primary in Henley, Robert Piggott in Wargrave and Moulsford Preparatory School were among the 74 children and 64 adults who took part and raised more than £44,000 for the centre, off Greys Road.

Barnaby Cole, who took part in the 17km walk with his eight-year-old daughter Sophie, who attends Trinity primary, said: “It’s a good local charity and this was a nice thing to do.”

Julian McLean, who completed the 12km walk with his son Henry, six, who is also a pupil at Trinity, said he was impressed by the children’s efforts, adding: “It was a great effort.”

Jo Smith tackled the 21km route with her sons Henry, seven, and Eddie Smith, 10, who both attend Robert Piggott School.

She said: “I was amazed at how they kept going. They had the option to back out at 17km and they said ‘no’.”

She said: “I couldn’t have been prouder of the girls. It was a lovely family bonding experience.”

Liz Deacon, community fund-raiser for the centre who led the tour, said: “It’s an incredible amount that these families raised for us and I thought it was really important for them to see what they the money was vfor.”