Pupils get to run school for day.. and find it’s not easy 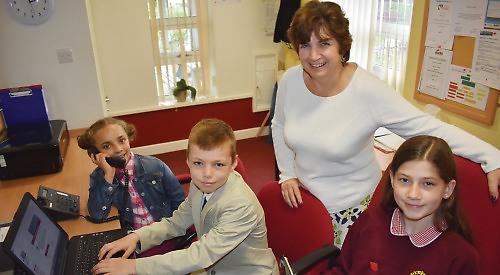 THREE pupils at Benson Primary School were given the opportunity to run it for the day.

The children were overseen by regular headteacher Helen Crolla.

Their tasks were to design the school newsletter, check on all the classes, run break time, be on lunch duty and present certificates for achievement to fellow pupils in assembly.

Malee said: “It was a good experience. It was different from being in a normal class and it’s fun to see what the headteacher does — it seems like a busy job.”

All three children said they had learned the importance of teamwork. The job swap idea was suggested by the school council to reward pupils who exemplify the school’svalues.

A boy and a girl from each class was chosen and their names were put into a hat before the lucky three were chosen at random.

Mrs Crolla said: “It gives the children an idea of the workplace as they see school from a different side and it gives them enormous amounts of confidence.”

Meanwhile, the school has launched a partnership with Benson Nature Group.

Mrs Crolla said: “This will enhance the wildlife-focused learning in and around the school grounds. Field trips will make much more use of the great green spaces in the village.”

On July 14 the group will stage a series of family-focused activities
in and around Millbrook Mead.
If you would like to be involved, email Edel McGurk at edel.mcgurk@yahoo.co.uk