My battle for breath only 300m from top of Everest 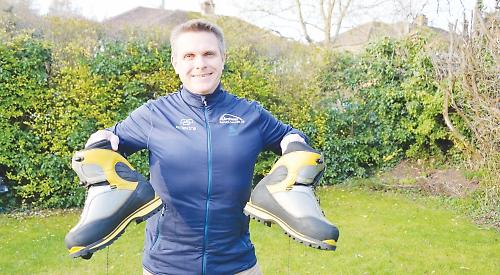 A CLIMBER from Peppard narrowly failed to reach the top of Mount Everest but says he is still proud of himself.

Dominic Renshaw was forced to abandon his ascent just 300m from the summit of the 8,848m mountain when his oxygen mask failed and he was struggling to breathe.

If he hadn’t turned back, he could have put his life at risk.

Despite this, he says the climb was the most awesome experience of his life and he raised more than £11,000 for the Thames Valley Air Ambulance.

He said: “Reflecting on it, it was the right thing to do. I was unlucky but I went for the adventure of Everest rather than the summit. It was about the whole adventure.”

Mr Renshaw, 46, of Shiplake Bottom, was part of group of 10 people, each accompanied by a sherpa, who undertook the climb after spending almost a month in Nepal acclimatising and practising ascents.

They began the actual climb on May 12 after enjoying some cake at base camp as it was Mr Renshaw’s birthday.

A week later they attempted to reach the summit late at night when it was pitch black with winds of up to 40mph and temperatures below -30C.

As they were above 7,000m, all the climbers breathed bottled oxygen through a mask as the proportion of natural oxygen in the air was only about 40 per cent compared with at sea level.

Mr Renshaw said: “We set off from high camp, carrying all our oxygen and kit. From high camp it takes about two-and-a-half hours to the summit.

“It’s steep at the end so you go from 8,500m to 8,800m. It was at that point I realised something was going wrong with my oxygen. I was having issues and could not breathe. We were on a steep bit and I was breathing very heavily. Something was not right.

“My sherpa was asking if everything was all right. He could see I was wobbling and we tried to get the mask to work as they can often get frozen but you can knock the ice out.

“It would not come back to life and I had a sheer drop on either side so it was a simple decision. With no oxygen, it’s a serious situation. Without it there was nothing I could do but turn round and get out of there.

“The summit was only 300m higher and I could almost see it.

“Making the decision to turn around was hard but in the end you have to be sensible.”

Mr Renshaw, who runs his own marketing company, had spent several years building up for the Everest challenge.

In the months before flying to Nepal he would spend hours every day walking between Sonning Common and Peppard Common.

He said that even though he failed to reach the summit, he had enjoyed the challenge. Mr Renshaw said: “It was just awesome and I won’t forget the whole experience, from base camp right up to near the summit.

“I’m really proud as it was one of my goals in life.”

He said the challenge was as much emotionally draining as it was physically.

“It’s to do with missing people but also you realise how badly it could all go wrong,” he said. “You are facing death on a regular basis.

“You see the bodies which becomes normal. As a mountaineer it doesn’t bother you but it does get to you emotionally. It makes you realise how short life is.

“I’m the most unemotional person and don’t even cry at funerals — that’s just not me.

“But I have come back a completely different person. There was something about Everest — it just gets in your head.”

When he returned, Mr Renshaw celebrated with a barbecue with about 15 friends and family, including his partner Jane Gealy.

He is still struggling to hear out of one ear due to the amount of time spent at high altitude.

More than 250 people sponsored him, including dozens from Reading Business Network International, of which he is a member.

He said: “The amount of support there has been is amazing and I want to thank everyone.

“They followed the expedition and put their hands in their pockets to help the charity, which will help save so many lives.”