Inventor of ‘seating stick’ for disabled in award bid 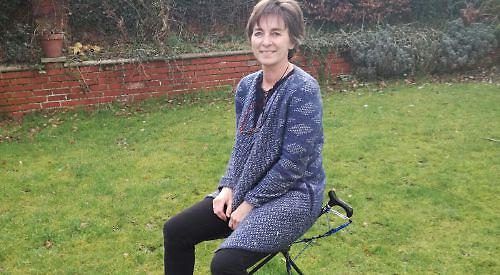 A WOMAN has been nominated for an award after inventing a lightweight walking stick that turns into a seat.

Caryn Moberly, of St Mark’s Road, Henley, designed and made the device to help a woman with multiple sclerosis who walks with the aid of two sticks but wanted to be able to sit and rest too.

She worked on the prototype for several months with help from fellow members of the Henley Inventors Club.

She then modified and improved it before making some more for other disabled people.

Mrs Moberly, 57, has been put forward for the Carpenter Award given by Remap, a charity with skilled volunteers who custom make equipment for disabled people in order to help them achieve independence and a better quality of life. The winners will be announced at an awards ceremony in London on Wednesday.

She said: “You are improving their lives or you are enabling them to keep doing something so their life does not deteriorate. Other inventions enable them to do new things. It’s good to help and really rewarding.”

Mrs Moberly received advice from Lucius Cary and Patrick Fleming on lightweight materials and mechanics and built the device in her shed. Now she hopes it can go into production.

She said: “People don’t pay for them but they can make a donation to Remap if they want. What we do is a free service.”

One of the people who benefited from the seating stick was Diana Way, who runs Way’s Rare and Secondhand Bookshop in Friday Street, Henley, with her husband Richard.

She used the device for several months last year before having her hips replaced.

Mrs Way said: “I was struggling to stand up or walk for a long time. The seating stick was very useful as I could sit down to rest for two or three minutes when I needed to but also put it on my back and carry it around. I did not use it all the time but it was helpful when I was out for a long time.”

Mrs Moberly said she liked being a member of the inventors club.

“I really enjoy the exchanging of ideas and talking through problems,” she said. “It’s not about finding money-making models or selling things. It’s about developing things and seeing what can be done to solve problems.”

David Martin, chief executive of Remap, said: “The Carpenter Award is the category for valuable but simple designs.

“If you look at what Caryn has made it’s clean and simple but effective and can be put to practical use.”