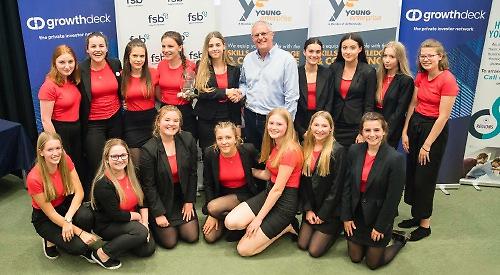 A TEAM of schoolgirls is hoping that their book of celebrity chefs’ recipes will win them a national competition.

The 18 pupils at Abbey School in Reading have made the national final of Young Enterprise with Chefs At Home, which features recipes from local chefs and restaurants as well as some famous names.

The girls include Mairi Weir, from Lower Shiplake, Ellie Emmanuel, from Sonning, Emily Riches, from Dunsden, and Sophie Wisely, from Sonning Common, all 17.

The contributors include Paul Clerehugh, who runs the Crooked Billet in Stoke Row, Mary Berry, the French Horn in Sonning and Villa Marina in Henley as well as Alain Roux of the Waterside Inn in Bray and Tom Kerridge of the Hand & Flowers in Marlow.

The girls wrote to the chefs asking for their help, telling them about their idea for the competition and were thrilled to receive such an enthusiastic response.

Mairi said: “We handwrote letters to all the restaurants and phoned them up and once we explained what Young Enterprise was they were keen to help.

“Once we had recipes from Michel Roux Jr, Alain Roux and Tom Kerridge we realised it was going to be quite big. Our motto is ‘bringing the community together through the love of food’.”

So far the sixth-formers have sold more than 350 copies of their book and a vegetarian version will be released this week.

The team, called Impact, was a runner-up in their Reading area final, then won the Berkshire final followed by the regional final at the University of Buckingham last week.

They will now represent the south central region in the national final on July 5 and 6 at the South Bank Centre in London against 14 other teams. If they win that they will progress to the international final in Serbia held from July 16 to 19.

Mairi said: “It’s very exciting as we never felt we would get this far. We’re just absolutely thrilled. To be able to publish two books before you’re 18 is something to be extremely proud of. Our ultimate aim is to take the book global.”

Sophia Wisely, said: “We’re quite surprised that we have got this far, to be honest, and we’re all really proud with what we have achieved.

“Publishing a book is a lot of hard work and responsibility and we’re just glad it has paid off and we have got recognition for what we have done.

“It was a really big learning curve for us actually because we were relying on other to send in the recipes and information.”

She said she was excited about attending the final.

She added: “We’re a bit nervous because obviously our competition will be strong but we believe our product is good and hopefully will get the recognition it deserves.”

She said her parents, Leena, who works at Henley town hall, and Duncan were proud of her.

“They know how much work has gone into this and how many hours we have spent at home and at school trying to get it done and meet deadlines,” she said.

• Chefs At Home costs £15 or £10 for an electronic version, and is available from www.chefsathome-online.com