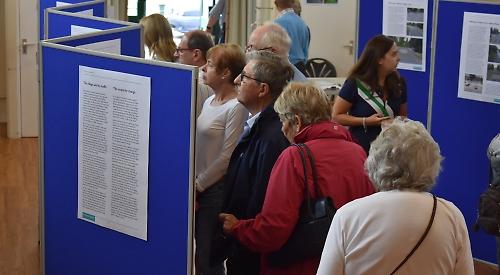 ABOUT 400 people attended a consultation meeting on plans to improve the centre of Sonning Common.

The parish council presented the ideas of street designer and traffic expert Ben Hamilton Baillie, which include improving traffic flow and stopping bad parking, with an exhibition at the village hall in Wood Lane.

Councillors spoke with residents and listened to feedback on the proposals and some villagers volunteered to help.

Mr Hamilton Baillie has suggested redesigning the village centre, where there are 10 shops, restaurants and other businesses. He also suggests making the centre of Wood Lane a different colour to the edges so that it appears narrower and encourages pedestrians and drivers to take more care.

Mr Hamilton Baillie also suggests redesigning the entrances to the village at the junction of Wood Lane with Peppard Road and with Kennylands Road and Reades Lane and introducing a central paved feature at the latter.

This would discourage drivers from speeding and make them more aware that they were entering a residential area. Again this would involve “narrowing” the road using different colours.

The road layout outside Chiltern Edge School in Reades Lane could also redesigned. This could include a new forecourt outside the school and another for the recreation ground to be created on the oppposite side of the road.

Stuart Howe, chairman of the parish council’s village centre working party, said there was a constant flow of people at the meeting and he had received about 60 feedback forms.

He said: “I have had a brief look through and would say that only two are from people saying no, they don’t want any improvements. A lot were saying they thought parking was a big issue. The brief we presented and the vision encapsulate everything people are concerned about.

“I’d like to thank the residents for turning up.”

The feedback will be collated and presented to the working party.

Councillor Howe added: “The easy work has been done and now we are on to the hard work.

“It’s lucky for us that the village has embraced this. From the exhibition, we have identified knowledgeable individuals who want to be involved.”

Mr Hamilton Baillie, who was paid £10,000 for his report, will give a presentation to residents in September.