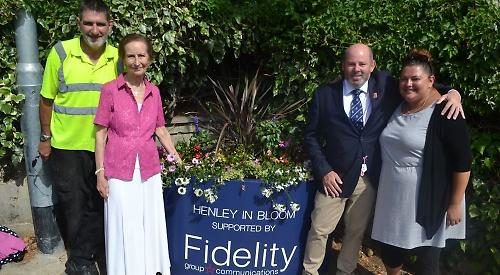 A NEW planter has been installed on the Berkshire side of Henley Bridge to welcome visitiors to the town.

It was unveiled on the first day of Henley Royal Regatta thanks to Henley in Bloom and sponsporship by communications company the Fidelity Group, which is based in Station Road.

Mr Shraga said: “We look after Leander’s services and they asked us to support it and we said ‘yes’. Anything that improves the town has got to be a good thing.

“It’s gives us a presence and we’re putting something back into the local community.”

Kellie Hinton, who chairs Henley in Bloom, said: “It gives a boost to the entrance and it’s great to have another local company supporting Henley in Bloom.”

She thanked Alan and Caroline Langler for their contribution.