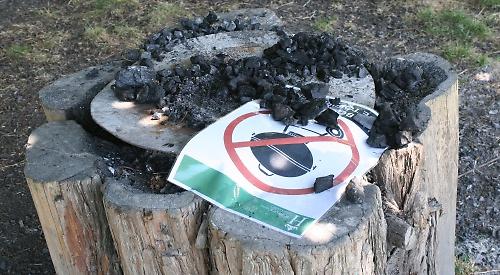 RESIDENTS and visitors are being urged to be careful not to start fires in Henley’s public green spaces.

The town council, which introduced a temporary ban on barbecues in Marsh Meadows last week, is encouraging people not to leave litter as it could spark a blaze.

It has warned that items such as drinks cans and glass bottles can magnify the sun’s rays and ignite dry grass or plants.

Because of the ongoing heatwave and breezes, a fire could quickly cover a large area of vegetation and even spread to houses.

The council is also reminding people that barbecues are banned at all times in Mill Meadows.

It has hired Shaun Roberts, a private enforcement officer based in the town, until the end of summer to ensure the ban is adhered to. He will wear a body camera to deter abusive behaviour.

Meanwhile, the council’s parks services team will soon cut the grass in Marsh Meadows and will continue to keep it short.

Councillor Kellie Hinton, who chairs the council’s recreation and amenities committee, said: “People need to take care not just in Mill and Marsh Meadows but in any green space.

“Our parks services team work hard but they’re not police officers or firefighters and shouldn’t be put in that position.

“We’d urge people to use some basic common sense. Only the other day I challenged some teenagers who were setting grass on fire with a deodorant can and a cigarette lighter, which is clearly not a very sensible thing to do. If your children are going outside, make sure they’re aware of the dangers.”

There have been complaints that the ban on barbecues is being ignored despite signs on each of the designated stumps. Patches of grass have been left with scorch marks where portable barbecues have been used. Councillor Hinton said that on Sunday Mr Roberts and the parks services team had stopped five groups of people from having barbecues on Marsh Meadows.

She said a member of the public had approached one of the groups and asked them to stop as they were breaking the rules but received a barrage of abuse and threats to throw him in the river.

He complained about it on Facebook and said the council should be doing more but Councillor Hinton said it had already been reported and he should have contacted the council.

She said: “Shaun was on his way when that incident happened and our parks services team were out and about asking people to stop, so we were doing what we could.

“There have been attempts to start barbecues but the people have listened to Shaun and put them out.

“I’m sure this will happen less as people become aware that the ban is being enforced. Shaun has been very effective but if people see smoke or other signs of a barbecue they can report it to the council or to individual councillors, who will pass the message on and get it stopped.

“Shaun is there as more of a ‘host’ than a security warden but the body camera is a very good deterrent because people know they can’t get away with being aggressive or continuing to break the rules.”

The safety message has been echoed by officers at the town’s fire station in West Street.

“A spark can jump a long way and rapidly ignite the vegetation in these dry, hot conditions and it soon becomes hard to control.

“The winds can spread flames quickly and if they change direction they can endanger property and ultimately lives. You even have to be careful with picnics so we’d urge people to clean up after themselves and take care with cigarettes.

“Recent fires at Marlow and Maidenhead have caused significant damage so please have a bit of common sense and, if you must have a barbecue, bring plenty of water and make absolutely certain it has cooled down before discarding it.”

There have also been complaints that litter bins at Mill and Marsh Meadows are overflowing but people have still left bags of rubbish in front of them.

Councillor Hinton said: “Our parks services team is emptying them several times a day on top of their many other duties but it just isn’t enough to cope with the thousands of visitors we’re getting at this time of year.

“It’s a bit like mowing a massive lawn — by the time you’ve finished, you’ve got to start all over again just to stay on top of it. They’re working very hard to keep the area as clear as possible. There are signs on every bin asking people to take their rubbish with them if they’re full.

“I know we live in a convenience society that generates a lot of rubbish but people should be willing to do that.”

• Barbecues were banned on Marsh Meadows in 2013 over fears that they posed a fire risk. It was initially a temporary ban but was made permanent because of complaints about scorch marks on the ground. In 2014 the council installed several metal-plated tree stumps where barbecues could be used.