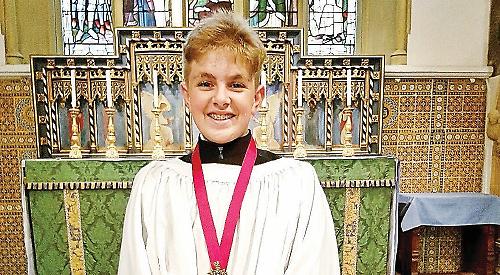 A TEENAGE chorister at St Mary’s Church in Henley has been awarded one of the highest accolades in his field.

Joe Croton was presented with the Royal School of Church Music gold medal during a Sunday service on his 14th birthday.

He joined the choir when he was just five. His mother Clare is a server at the church in Hart Street while his grandmother Sheila is head server and parochial church council secretary and his grandfather David sings bass in the choir.

Joe has taken part in the school’s Voice for Life award scheme for nine years.

He passed all the lower grades, which are assessed internally, and achieved his silver and bronze medals after passing external examinations. To achieve gold, Joe had to learn 12 pieces of music and perform them for a panel.

He sang some solo while for others he was accompanied on the organ by Sebastian Thomson, the director of music at St Mary’s.

Joe had to demonstrate knowledge of church liturgy by writing a service and choosing appropriate hymns for the season.

He also had to write an analysis of Handel’s Zadok the Priest, which looked at both its musical structure and its history.

Joe, who sings treble, was one of the youngest entrants nationally to win the award this year and one of the first ever from St Mary’s.

Following the service in June, worshippers celebrated with a small party where drinks and snacks were served.

Joe currently attends St Michael’s Catholic School in High Wycombe, where he lives, but he hopes to study performing arts at The Henley College after finishing his GCSEs.

He also plays the oboe and is about to perform in Garsington Youth Opera’s production of Wild Swans.

His grandmother said: “Everyone at the church is very proud and has been so supportive from the beginning.

“Joe is very popular, especially with the elderly ladies, as he’s quite the gentleman and is always dressed smartly.

“We’re all just amazed at how well he has done. He has worked incredibly hard for well over a year to get there so it’s well deserved.”