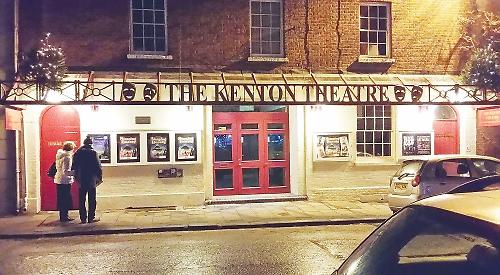 THE chairman of the Kenton Theatre in Henley has resigned after less than two years in post.

Rick White, who was appointed in October 2016, stepped down on Tuesday after an “internal disagreement over management issues”.

The 58-year-old, from Goring Heath, is to be replaced on an interim basis by fellow trustee Cliff Colborne, who has been involved with the historic New Street venue for more than 40 years and was chairman some years ago.

Mr White was previously head of marketing at Henley investment firm Invesco Perpetual, a position he held for 12 years, and also a chairman of the Henley and District Agricultural Society.

He became a trustee of the Kenton in early 2014 and prior to that was a patron along with his wife Cathy and their family.

At the time of his appointment, he stressed the need for the theatre to continue supporting locally-produced amateur drama as it developed its programme.

He said: “We have an extremely professional and diverse range of shows... while it is important for the theatre to generate revenue to maintain it and its activities, it is important that we have that balance.

“We have West End productions and provincial prices.”

Mr Simons, who lives in Henley, resigned in August 2016 for “personal reasons”.

It came only weeks after a row at the theatre’s annual meeting, where proceedings were abandoned amid protests over an unannounced change in the procedure for voting in new trustees.

The theatre’s general manager Wendy Bowsher, resigned the same month, having served for a decade.

Mr Colborne is a former Thames lock-keeper and is moorings manager for the annual Thames Traditional Boat Festival in Henley.

He has served as a freelance sound and lighting technician at the theatre and a set designer for Henley Amateur Operatic and Dramatic Society.

Mr Colborne said: “All the trustees are very sorry that Rick has decided to resign after serving as chairman during a difficult period. I want to thank him publicly on behalf of us all for the time and effort he has given.

“Fortunately, we have a strong and dedicated board. The programme of improvement and the presentation of a wide spectrum of local and professional shows to appeal to all ages and tastes will continue as before.”

The news comes just a week after the departure of the Kenton’s joint manager Tom Ryan, who was sharing the role with Paula Price-Davies following the departure of general manager Zsuzsi Lindsay in January 2017.

He said he wished to focus on the Henley Literary Festival, which he has helped to run with his mother Sue for the past six years.

The Kenton Theatre, which is Grade II listed, was founded in 1805 and is the fourth-oldest working theatre in the country.