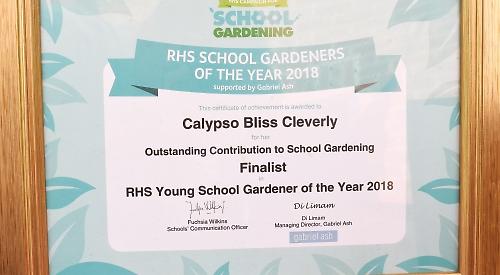 A GIRL from Goring has been named the runner-up in a national children’s gardening competition.

Calypso Cleverly, six, of Milldown Road, was the youngest of four finalists in the Key Stage 1 section of this year’s Royal Horticultural Society School Gardeners of the Year Awards.

The youngster, who has just finished in year 1 at Goring Primary School, was chosen for her dedication to the school’s kitchen garden project, which her mother Sophia launched in spring 2016.

When she was just three years old, Calypso would regularly help Mrs Cleverly and her team of volunteers to transform a dilapidated courtyard into a space where pupils could grow fruit and vegetables.

She helped weed and dig the soil while the adults built and installed planters with help from members of Goring Gap in Bloom and the Goring Village Greenfingers gardening club.

Calypso also persuaded many of her classmates to join in by growing crops from seed, watering the plants every day and harvesting them.

They have sold some of the produce for charity and to fund extra gardening supplies and also learned to cook with the vegetables. The produce is also regularly included in the school lunches.

Last year, every pupil at the school took part in the society’s Big Soup Share scheme in which they sold soup made from their produce and raised several hundred pounds for Unicef’s education projects in Myanmar. Several Goring community groups and parishioners from the village church also took part.

Later, the school garden was judged as part of Goring’s entry into the Britain in Bloom competition, which won a gold award in the small town category for the Thames and Chilterns region.

Calypso tends the seedlings in the classroom until they are ready to plant out and waters the garden almost every morning and evening during term time. She and her friends have also held sales in the street outside her house.

More recently, she started tending a neighbour’s garden while they are away for the summer holidays.

Calypso will be moving to South Stoke Primary School next month and hopes to establish a kitchen garden there.

She was nominated for the RHS award by her mother, who submitted a video of her at work. She was presented with a certificate by Frances Tophill, the presenter of ITV’s Love Your Garden, at a ceremony at the society’s botanical garden at Wisley. She also received money for a cold frame.

Calypso made friends with Shreya Per, seven, from London, who won the category, and now the pair talk regularly online, sharing gardening ideas and tips.

The girls plan to meet again over the summer holidays.

Mrs Cleverly said: “I’m very proud of her because she’s such a hard worker and so welcoming of others.

“From the outset, Calypso could see that gardening was a sociable activity so she started telling all her friends about it and roping them into it, including all the manual labour.

“She’s out there every day doing whatever is needed and it’s wonderful that she and Shreya got on so well together.

“Gardening takes a huge amount of resilience and determination because you’re always losing crops to disease or pests and having to improvise. Sometimes you have the joy of seeing things grow but other times there’s frustration and you have to learn to deal with that.”

Mrs Cleverly, who teaches relaxation classes in schools, took up gardening herself about 10 years ago and started a garden at the village pre-school when she and her husband Jesse’s older daughters Stella and Joy, now 13 and 10, were pupils.

Then she decided to do the same at the primary school, which was keen to support her following the retirement of art teacher Myrna Anderson, who had run a gardening club.

Mrs Cleverly said: “It was incredibly hard work but we had it up and running and were selling produce at that summer’s school fete, which we were very proud of.

“Calypso has shown a lot of initiative and come up with her own ideas like planting a strawberry patch and selling the runners.

“Being outdoors is very important for children’s wellbeing, as is eating well and spending time with other people. Gardening brings all those things together which is why I’m so keen on it.

“Additionally, children who grow things like kale and tomatoes will eat them and Calypso now likes a lot of vegetables that she wouldn’t have tried before.

“She has also learned that great things are possible when you get a group of people together to work on something.”

Stephanie Bridle, chairwoman of Goring Gap in Bloom, said: “I’m absolutely delighted for Calypso as our whole purpose is to inspire younger people to get into gardening — after all, someone has to take over from us oldies eventually.

“Myrna is so pleased that someone has taken on that mantle for the children. Seeing future generations getting involved makes our own efforts feel so worthwhile.”