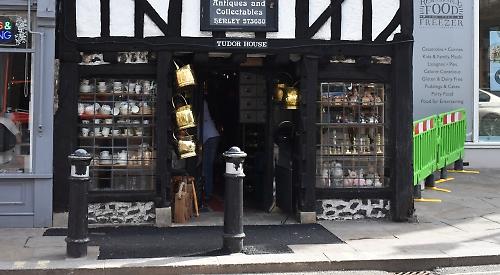 AN antiques dealer has criticised a utilities company following its attempts to repair an underground cable outside his shop.

David Potter was forced to close Tudor House in Duke Street, Henley, for a day last year when it suddenly lost all power.

Scottish and Southern Electric came out to fix the problem but realised it couldn’t dig up the pavement without permission from Oxfordshire County Council, the highways authority.

So workmen installed a temporary cable which ran up the side of the timber-framed building and across the top of its frontage to restore the power.

But Mr Potter heard nothing more and so called them about a month ago to complain.

Then overnight on Wednesday last week the workmen returned and dug up 10 York stone paving slabs directly outside the front door to fix the fault but left the cabling.

The slabs have been stacked up against an electrical junction box beside the medieval building and the hole filled in with Tarmac. Mr Potter said: “Last year they turned up with trucks and big diggers but then said they couldn’t do the work because of the complications with the paving so then they did that temporary fix with the outside cable.

“They said they would talk to the council about it but seemed to get waylaid as nothing more was done for some time after that. They were very apologetic when I complained and must have done it overnight because I only noticed it the morning afterwards.

“I’m glad they returned but they’ve still left that massive great cable outside the shop, which isn’t ideal as it looks bad and could do some damage if some drunken yob decided to pull on it.”

He added: “I don’t know whether they’ve actually finished the repairs but I won’t be very happy if they haven’t.”

The utilities company has not said when it will restore the original slabs, which it must do within six months under the New Roads and Street Works Act 1991.

It has left about half of them, which cost about £700 per square metre and are a popular target for thieves, out in the open behind two plastic barriers. Three years ago, about 50 York stone slabs worth thousands of pounds were taken from outside Nettlebed Village Club.

Henley’s town centre pavements were relaid in York stone by the town council in 2001 when it spent £600,000 pedestrianising Falaise Square in Market Place.

In 2013 former Henley mayor Dave Smewing, who was on the council when that decision was taken, identified 21 sites in the town centre where utility firms had replaced York stone with concrete or Tarmac.

This prompted his successors to urge the county council to order those companies to restore them to their original condition, which was successful in all but one or two instances.

An SSE spokeswoman confirmed the repairs had been successful and a new set of slabs will be laid once the design is agreed by Henley Town Council, whom it has approached. Workmen will return to remove Mr Potter’s temporary cable in due course.

She added: “We resurfaced the pavement on a temporary basis because it is quite narrow in that part of the town and felt it was better and safer to reinstate access for pedestrians as soon as we had finished.”