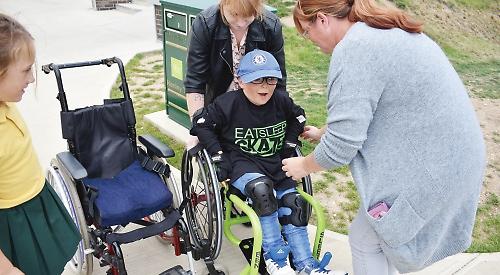 A BOY from Henley with spina bifida has been presented with a specialist wheelchair so he can go skating with his friends.

Ben Sleet, eight, of Gainsborough Hill, was surprised with the wheelchair at the skate park in Makins recreation ground on Tuesday. He regularly visits the park but struggled to use it as his old wheelchair was too cumbersome.

His mother Angela, who is his full-time carer, found a sports wheelchair which would give him more stability and started an online fund-raising campaign to pay for one.

The wheelchair moto-cross chair, which is made from lightweight steel, cost £5,000 but Mrs Sleet received a £4,000 donation from Fareham-based Eight Wealth Management’s Eight Foundation scheme.

The Henley Skatepark Initiative  donated the other £1,000, while donations from residents and supporters were used to pay for Ben’s full-face helmet, elbow and kneepads and other safety equipment.

Ben, who attends Valley Road Primary School, can only walk with a zimmer frame and both his legs are in braces. He also has club foot and a dislocated left hip as well as suffering from epilepsy for which he takes regular medication and hydrocephalus.

Despite this, he dreams of becoming a professional freestyle wheelchair sportsman and spends almost every day at the skate park with his mother.

He knows most of the skaters and some wheel him along on their skateboard. He was even taken for a ride by skateboarder Richie “Geordie” Inskip at the official opening of the £290,000 skate park last year. Ben was presented with the new wheelchair by family friend Kirsty Wooldridge, who works for Eight Wealth Management, and her colleague Victoria Riggs.

They had decorated it with blue ribbons and balloons, the colour of his favourite football team Chelsea. Ben’s name adorns the front.

As the women brought it on to the skate park, Ben shouted “is it mine?” as family and friends crowded round to catch his reaction.

He immediately got in to the chair and spent some time on the skate park, joined by friends including Angus Spiers, seven, who also uses a wheelchair, and Welsh wheelchair moto-cross athlete Lily Rice, who came for the day specially.

Ben said: “It’s really good. I was so shocked when I saw it. I was thinking ‘whose is it’ but it had my name on it.”

Mrs Sleet, who lives with husband Mick, and other children Gemma, 22, and Liam, 16, added: “It was brilliant seeing his face, I’m so happy. If it wasn’t for these people Ben wouldn’t have this chair. They are amazing and don’t realise how much they have changed Ben’s life.

“He’d wrecked his old chair but this one is designed to take knocks and he’s going to be more safe and secure on it.

He can hang out at the skate park with his friends now. It’s made his life better and I’m so grateful.”

Ms Wooldridge, who lives in Henley, said: “Ben is in the same class as my daughter Kitty and I know Angela very well.

“I’ve known Ben since reception at Valley Road and he’s a lovable child.

“I love him to bits and wanted to help so I went to the foundation. I’m really chuffed for him.