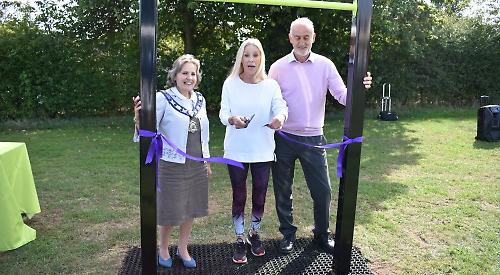 A new children’s playground and outdoor gym at Makins recreation ground in Henley have been officially opened.

Dozens of people attended a party at the field off Greys Road on Saturday, where ribbons were cut by town councillor Ken Arlett and trainer Angie Best, who lives in the town.

In April, Henley Town Council agreed to install a 25m steel cableway, a 4m “pirate’s lair”, a crusader rope swing, a swirl roundabout and a toddler zone at the playground off Greys Road as part of an £80,000 revamp.

The equipment was provided by Wicksteed, of Kettering, which won the contract for the project at the playground.

The £10,000 outdoor gym was funded by a grant from South Oxfordshire District Council and the town council. The gym equipment includes a pull up bar, cross-trainer, exercise and hand bikes and leg and chest press machines, which was installed by the Great Outdoor Gym Company.

Celebrations on the day were held from 11am to 1pm and included a children’s fancy dress competition, which was won by Hallie Hinton, eight and Eden Scivyer, seven, who dressed as a flamenco dancer and ancient Egyptian respectively. They each won a £10 WHSmith gift voucher.

There were also demonstrations and entertainment including live music from singer Israel Onoriode, while food vans and stalls were set up including a display by the Gainsborough Residents Association, which is made up of residents from the neighbouring Gainsborough estate.

For the full story and more pictures, see this week’s Henley Standard.