Market trader finally has to give up his pitch 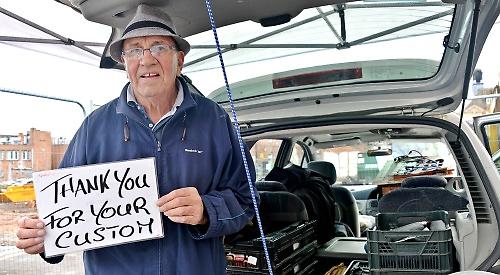 A HENLEY market trader has had to leave his pitch after 18 years.

Brian Poole set up his stall behind Market Place Mews, off the King’s Road car park, in 2000, after moving from Kingston-upon-Thames to Hurley.

Between Thursday and Saturday each week he sold reading glasses, umbrellas and watch batteries and straps as well as sunglasses in summer and hats and gloves in winter.

The 73-year-old’s final day of trading was on Friday, when he had to leave as the mews are being redeveloped for the £11 million Gardiner Place scheme comprising nine flats, shops and a restaurant.

Mr Poole, who grew up in London and has worked in markets since he was 15, hopes that South Oxfordshire District Council, which runs the car park, or an adjoining landowner will offer him an alternative pitch.

He said: “I’ve known this was coming for a long time but I’d love to find another pitch so that I can still be here.

“All I really need is one day a week, ideally on the Thursday market days. So many people have come up to me asking where I’m going to go and how will they get their watch batteries now.

“I really should have done a petition while I was still trading as I would have got so many signatures. There’s pretty much nobody that I don’t know in Henley.”

Mr Poole ran his first stall at Petticoat Lane in the East End and later worked at Shepherd’s Bush market for 22 years, where he sold luggage and accessories.

After moving to Hurley, he took up his pitch behind W H Smith on the recommendation of his friend Dave Woods, a greengrocer, who occupied a neighbouring plot until he retired in 2010 after 20 years.

Mr Poole said: “I will miss that contact with people the most. It’s becoming far less common in everyday life to have an ongoing relationship with somebody you trade with — the milkmen have all gone, fewer people have window cleaners and so on.

“The market game has had its heyday but it’s my game and I’m still passionate about it. It’s an apprenticeship in life itself because you get to know so many people from very different backgrounds.”

The redevelopment of the mews was first revealed in 2007, when the site was owned by the DeStefano Property Group, but was delayed when the company went into administration in 2015.

The land was bought by London venture capitalists Catalyst Capital, which decided to continue withthe new development and tenant businesses began moving out of the old retail units in 2016.

Among the market traders was Denise Benham, 61, who had run the Regal Flowers stall next to Mr Poole’s for about 30 years while he chose to remain until he was no longer able to.

Mr Poole said: “It has been a terrific 18 years and I’ve had great loyalty from all my customers.

“They enjoy a bit of chat and banter, which is something you don’t get in the supermarkets or the post office any more.”