Free talk on eye care from the experts 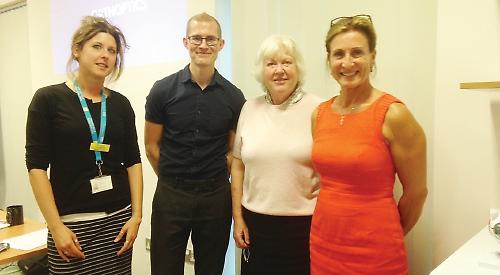 Annette Bacon, a consultant at the Royal Berkshire Hospital in Reading, described the different phases of typical eye health with a focus on cataracts. She showed a video of an operation and described how it was done and the developments in the types of lenses that are now fitted.

She also touched on glaucoma and the low percentage of the population that has to deal with the symptoms with the benefit of drops.

There were lots of questions about causes and latest treatments.

Vicki Sandford discussed her role working with young children and the typical conditions such as squints which are now picked up early through testing in schools.

Consultant Sarah-Lucie Watson talked about macular disease and the causes and treatments.

She said she hoped to be able to treat patients at Townlands if the right equipment became available.

The Friends of Townlands have supported the purchase of new equipment for the hospital.

The health talk was the sixth to be organised by the patient participation group at the Bell Surgery.

The next talk will be on pain management and will talk place in the Maurice Tate room at Townlands on October 30 from 6pm to 8pm. Places can be booked through the surgery.