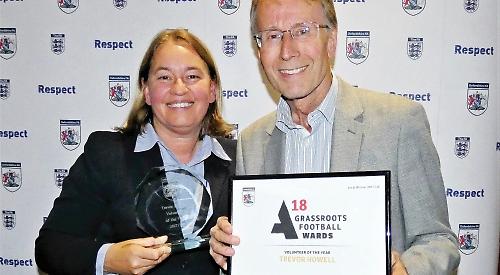 A MAN who has dedicated years to children’s football in Henley has received an award.

Trevor Howell, who is chairman of AFC Henley, was named volunteer of the year at the Oxfordshire Football Association’s Grassroots Football Awards.

He has been involved with the club for more than 20 years and was nominated by the club’s vice-chairman Matt Jones.

He was one of three shortlisted candidates before the winner was revealed at an awards ceremony at the Kassam Stadium, the home of Oxford United FC.

Mr Howell, who attended the event with fellow committee member and fund-raiser Toni Aitken, was presented with a glass trophy and framed certificate by Rachel Pavlou, the FA’s national women's football development manager.

In a video film shown at the awards, Mr Jones praised Mr Howell’s accomplishments, including quadrupling the club’s membership at junior level.

He led the club’s campaign for a new £3 million clubhouse and artificial 3G pitch at Jubilee Park, off Reading Road.

He suggested the idea to the town council, which owns the facility, for inclusion in its neighbourhood plan with the developer of a neighbouring housing site paying for it.

The council, club and Henley Hockey Club, which would share the clubhouse, are now in talks with South Oxfordshire District Council and the council is writing a business case.

Mr Howell, who has been club chairman since 2015, said: “I was very pleased even to be shortlisted because it’s nice to get some recognition. Anyone who runs a sports club is giving a lot of time to the community in various ways and while you’re not giving food to old people or doing anything overtly charitable, it’s still incredibly valuable.

“Parents really depend on us and there’s a huge amount of responsibility involved in all areas, from child welfare to skills training and it all contributes to the wider activities that go on in the town.

“The families that are members often thank us for what we do and I think this is good, not just for me but for the club as it shows that what we do is worthwhile.”

He began helping the club when his eldest son Oliver, now 26, joined shortly after the family moved from London in 1997. His other son Will, now 23, was also a member for a time.

For several seasons Mr Howell would help with tasks such as scheduling fixtures, obtaining kit and general administration.

He was then elected to the club committee and one of his first initiatives was to introduce a mini-soccer session for under-fives to under-eights on Saturday mornings. The sessions, which are run by professional coaches from Reading FC, are still going strong as are midweek workshops for under-fours to under-14s.

This helped increase the club’s membership among the younger age groups and many of the children remained until they outgrew the club.

It works in partnership with Henley Town Football Club so that members can continue playing as adults.

Mr Howell said: “When we launched the mini-soccer scheme there was a competing football school that was heavily undermining our membership and we had to take radical action to address it.

“It became the vehicle through which we transformed the club by getting plenty of interest among the younger age groups.

“By allocating the best coaches to the youngest children, we boosted their confidence at a very early age and that gave them the interest to continuing pursuing it.

“We’ve currently got 76 players below the age of eight and the record is 90, which is a very good number, and in their last year at that age group we prepare them for league football at under-nine level.

“We’ve got three teams in that age group with sometimes as many as 40 children.”

Mr Howell, who was appointed vice-chairman in 2010, worked on the clubhouse idea with Dieter Hinke when he was chairman of both the club and the town council’s planning committee and neighbourhood plan governance committee.

He said: “We thought it was a pretty good suggestion on our part.

“Our changing facilities and toilets are on the opposite side of the road, which is far from ideal safety-wise when you’ve got children having to cross the road.

“We’ve got some very early designs together and the 3G pitch has more recently become a part of the proposal, making it a pretty substantial development in total. If all goes well we’re hoping it could be completed by 2020.

“I’ve always felt that the minimum we should be able to offer children is a decent playing surface and good kit, coaching and changing facilities.

“We’ve provided most of that but have fallen short in some areas and are looking forward to making improvements as soon as we can.

“I’ve always enjoyed my work with the club because it’s always rewarding to do things for others in the community. It’s hard work — for example, I’ve personally overseen the Saturday sessions on 40 weeks of every year for the past 18 or so years.

“However, I chat with all the parents at the gate and when I hear all the positive comments and see the large numbers of children enjoying themselves while developing their skills it all becomes very worthwhile.”